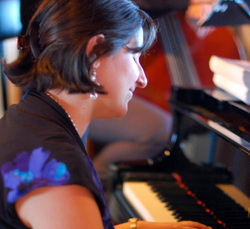 Laura Dubin is a native of Rochester and has close ties to Western New York.  Laura is a graduate of the stellarly recognized music program at Western Michigan University where she studied with many luminaries including famed trumpeter Fred Hersch.  Laura has also appeared at the Jazz at the Lincoln Center with Janis Siegel and Mark Murphy, The Detroit International Jazz Festival, and The Kennedy Center.

Most recenty she has lived and performed in Mexico City and often accompanied by drummer Antonio H. Guerrero.  In 2013, Laura released her first CD entitled Introducing The Laura Dubin Trio with 10 original compositions.  She is accompanied by Antonio Guerrero on drums, and bassist Sam Weber.

What follows is a video of the Laura Dubin Trio performing the Thelonious Monk tune I Mean You.