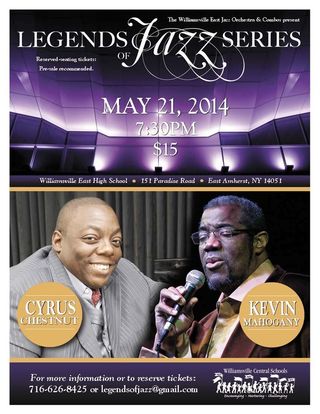 The Buffalo area gets legendary jazz upcoming in the next week. Of most prominence is the double billing of Cyrus Chestnut and Kevin Mahogany at the annual Williamsville East High School Legends of Jazz Series. This concert takes place on May 21st at 7:30pm and is a rare treat for the area. It supports the cause of providing jazz education to our youth as well.

Cyrus Chestnut has been called by Time magazine this generation’s best jazz pianist. Kevin Mahogany can be considered a trendsetter jazz vocalist who started a resurgence, which now brings us the likes of Gregory Porter.  Here is Cyrus Chestnut performing Yardbird Suite:

On Thursday May 15th, the Miles Davis Tribute group, Star People, returns to PAUSA Art House. The two previous concerts have been spectacular. Led under the direction of George Caldwell on piano, it also features Bobby Militello on sax, Tim Clarke on trumpet, John Bacon, Jr. on drums, and Danny Ziemann on bass. Filling in on tenor sax is Miles Tucker.  They will be doing selections from the Miles Davis ESP album:

Other Jazz In Town

My Cousin Tone’ appears at Wegman’s on Sheridan and Evans Friday at 6:30pm

Tri PAYAZZO will be at the Phoenix Restaurant 3pm on Sunday