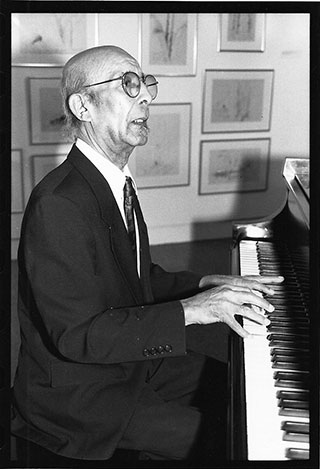 May 28, 1921 is the birth date of one of the most revered figures in Buffalo Jazz history.  From 1968 until his all-too-soon death in December of 2002 at the age of 81, Al Tinney left an inerasable mark on the Buffalo jazz community.

Al Tinney was a very influential bebop pianist, who is credited with introducing some of the very first bebop arrangements in history while leading the house band at Monroe’s in New York City from 1939-1943.  Playing with none other than future jazz giants Charlie Parker and Max Roach.  Tinney also influenced many local jazz artists during his years in Buffalo.

Al Tinney frequented the Colored Musician’s Club often and passed on his genius to many.  He was a lecturer at UB and was an ardent supporter of jazz in the community.  It is unfortunate there are not many recordings of Al Tinney.  One exception is the album/CD entitled Peg & Al from 2000 featuring the wonderful vocal talents of Peggy Farrell.

One way to remember Al Tinney is to view this gift of love video produced by Al Tinney’s daughter – Angela Leavy.  You will hear a performance of On Green Dolphin Street with master bassist Sabu Adeyola featured in beautiful solo runs.  Angela also included many family photos.