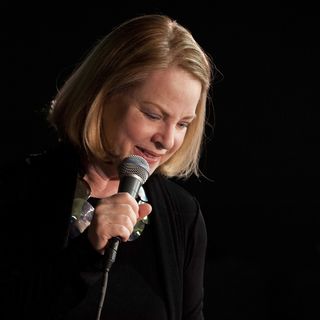 This week, the ladies of jazz and song will fill the Buffalo area with their talented musical artistry.  Two special events featuring jazz vocals and an all-woman jazz quartet will take center stage.

On Saturday, June 21st, acclaimed jazz vocalist and recording artist Barbara Levy Daniels will be appearing at the Premier Cabaret Room located in MusicalFare theatre beginning at 8pm.  Tickets are $15.  Barbara is fresh off her highly praised CD entitled “Love Lost And Found”, which was released in October 2013.  Two previous recordings also received rave reviews.  She is also working on a new recording in New York City to be released next year, which will feature Houston Person on saxophone.  Most recently, Barbara has made appearances at the Metropolitan Room in New York City, of which she is appearing this week on the 18th.

Here is a fabulous clip of the recent recording session Barbara is working on:

Backing up Barbara Levy Daniels this Saturday will be George Kane on guitar, Abdul Quadir on drums, Jim Beishline on piano, and Wayne Moose on bass.

Also on Saturday, the Buffalo Belles Quartet will be performing at Pausa Art House beginning at 8pm.  This quartet features Maggie Roston on flute and sax, Jenny May on bass, Christina Custode on keyboards, and Peggy Scalzo on drums.   This is most definitely an all-star line-up as each performer has done spectacular projects with other groups.  Maggie performed in France for 12 years so the evening will be a celebration of French influence on jazz.

Music On The Lawn Of The Asa Ransom House 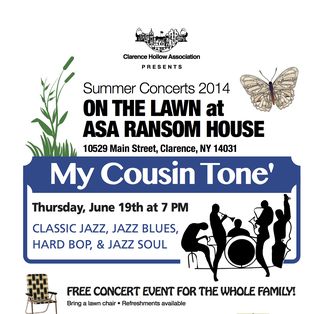 This Thursday finds a summer event in Clarence for the Clarence Hollow Association Summer Concerts 2014 – On The Lawn Of The Asa Ransom House.  My Cousin Tone’ is kicking off the series this year beginning at 7pm.  Bring your lawn chairs and coolers for a true summer jazz night.  Keeping the spirit of ladies in jazz this week, My Cousin Tone’ is led by Karen Ragusa on bass and also features the jazz vocals of Mary McMahon.  The band will also feature Andy Peruzzini on trumpet, Bill Basil on drums, Tim Martin on sax, Tony Zambito on percussion, and Jim Matelliano on keyboards.  The band has a night planned of jazz standards, jazz soul, and jazz blues.

If you are working downtown tomorrow the 18th, you may want to take a lunch break and see the George Caldwell Quintet at the M&T Lunch Concert Series, which will also include Bobby Militello.  On Friday, the George Caldwell Sextet will also be the featured band for the Party on the Portico event being held at the Buffalo History Museum.  Admission is $10. The George Caldwell Sextet (Jazz, Funk, Standards) Grammy award winning jazz pianist and band leader George Caldwell delivers exciting new arrangements, jazz originals, and ‘old school funk’ while introducing his six piece band and vocalist. Lineup: Bobby Miltello-sax and clarinet; Tim Clarke – trumpet; John Hasselback – trombone; Danny Ziemann- bass; Darryl Washington – drums; and, featuring vocalist, “Zoe!” (Zoe Viola Scruggs).  This band sounds like a party!

Stay tuned for more but in the meantime: