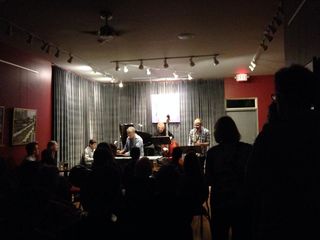 From the moment you heard the first note by jazz vibraphonist Dave Kayne, you knew your ears and senses were in for a special evening of jazz.  Last night’s concert At PAUSA Art House was indeed a memorable stellar performance.  The concert, billed as Citizen Kayne, marked the return visit of jazz bassist extraordinaire Cameron Kayne to Buffalo.  Cameron is now the bassist for the famed Airmen of Note, the United States Air Force Jazz Band.  No easy feat to meet the grueling audition process and be selected from the best.

Cameron teamed with his Dad, who is one of the most gifted jazz vibes players in the area, as well as members of the What Would Mingus Do? group led by Kelly Bucheger on sax, Michael McNeil on piano, and John Bacon, Jr. on drums.  This was a night featuring the rare occurrence of all original jazz compositions with improvisational moments.  Special moments were in abundance throughout the concert.

The opening number, Blues For Shelly composed by Dave Kayne, set the stage with bluesy rhythms and showcased a solo spectacle from Cameron.  Evident was Cameron’s evolved command of his instrument and craft.  Masterful and captivating to listen to as well as watch – here is a clip to see and hear for yourselves:

While the night celebrated the Kaynes, it also featured fantastic original compositions by Kelly Bucheger and John Bacon, Jr.  In the first set, Bacon’s composition, Dark Angel, was mesmerizing in its fluid airy catchy melodic sound contrary to the song’s title.

In the second set, Bacon’s original tune When Sonny Gets Red, gave ample room for the band to shine.  Kelly’s sax pushed into every corner of the room and Michael McNeil's lyrical lines on piano made for a crescendo building performance.   Two of Bucheger’s compositions from the What Would Mingus Do? repertoire showed once again why Kelly is leading the way in Buffalo when it comes to original jazz.  Ending the first set with his composition Trick Treat, a treat it is, made you want the band to forgo its’ break.  Green Eyes, another Kelly composition, is a ballad-like score creating space for his stellar sax artistry.

Perhaps the most special moment of the evening came when Dave Kayne’s original composition, Cameron, was performed.  While a song named after your son may make us all think of a softy weepy ballad, this was jazz-fusion at its’ best.  Dave Kayne displayed mastery of the vibes to set the stage.  The other members then gave openings for Cameron to produce the powerful bass lines, which you could swear came from an electric bass versus his upright, to improvise.  It was in this moment you could see the smiles and joy of a father amazed at his own son’s artistry.

A spectacular evening of jazz it was.  To see Cameron grow from the high school bass prodigy to now evolving into a true jazz master is something truly noteworthy.  To see father and son bask in the glow of their musical talents even more special.