A summer filled with jazz music is winding down post-Labor Day.  Yet, there is plenty of great jazz to be heard all around WNY.  Some notable events include:

At PAUSA Art House you will find two scheduled performances worth checking out.  First up, Thursday, September 4th at 8pm is Acme Nipple.  Led by Kelly Bucheger on sax, Acme Nipple is being called the edgy alter ego of the band What Would Mingus Do? Kelly describes the band as a more funky, electric, and “guitary” version.  The band will consists of Ron LoCurto on guitar, Michael McNeil on piano, Abdul-Rahman Qadir on drums, and Mark Harris on bass. 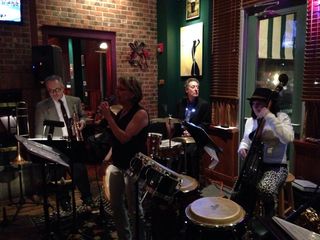 Next up at PAUSA Art House on Saturday, September 6 at 8pm, My Cousin Tone’ will perform.  The band has been together for a few years now and has tight grooves in jazz and jazz blues.  Mary McMahon, one of our stellar female jazz vocalists in WNY, will be reaching into the book of jazz standards known as the Great American Songbook.  Get out and hear Karen Ragusa on bass, Tim Martin on sax, Andy Peruzzini on trumpet, Jim Matteliano on piano, Bill Basil on drums, and yours truly on percussion.

The Anchor Bar will have the long running Friday night band, The Jazz Example once again at 8pm.  On Saturday, look for Sol Y Sombra at 8pm.

Joyce Carolyn with the Abdul-Rahman Qadir Trio at the 31 Club Friday, September 5 at 9:30pm

Cheryl Ferris Trio with Joe Baudo and Ray Chamberlain at the Ramada Saturday, September 6 at 7pm.

All Hands with George Jones on piano, Bill Staebell on bass, and John Bacon, Jr. on drums at Oliver’s Saturday September 6 at 7:30pm.

Doug Drieshpoon  and Friends at Nektar’s on Saturday September 6 at 9:30pm with Doug on drums, Kelly Bucheger on sax, and Greg Piontek on bass.