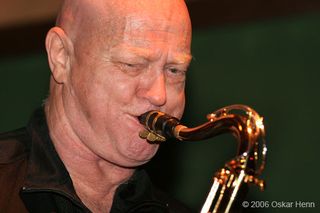 One of Buffalo’s favorite sons, visiting from California, makes a return to Buffalo for two nights of performances.  Don Menza, born in Buffalo in 1936, has had an illustrious career as a notable tenor saxophonist in the jazz world.  He has made a name for himself as a musician, composer, arranger, and educator.  Performing with some of the biggest name bands in the annals of jazz history.  Including Maynard Ferguson, several years as part of Doc Severinsen’s Tonight Show Band with Johnny Carson, the Buddy Rich Big Band, and notable sideman efforts with Elvin Jones and Louie Bellson.  He has also recorded with Nancy Sinatra and Keely Smith.

Menza will be performing on Thursday, September 18th and Friday, September 19th at PAUSA Art House in the Allentown district of Buffalo.  Each perfromances starts at 8pm.  Joining Menza both evenings will be Bobby Jones on piano, John Hasselbeck, Jr. on trombone, Danny Ziemann on bass, and John Bacon, Jr. on drums.  A rare opportunity to catch one of the premier tenor saxophonists in jazz as well as a Buffalo Music Hall of Fame inductee in 2005.  Here is a fantastic video from 5 years ago of Don Menza performing in France – 6 minutes of tenor saxophone genius:

Before the Friday Don Menza performance at PAUSA Art House, arrive early and listen to Accoustic Preludes with Walter Kemp III beginning at 6:30pm.  Walter is one of Buffalo’s most gifted pianists and a member of the jazz fusion band Gruvology.

The Cas Rodriguez Latin Orchestra will be performing at Kleinhans Music Hall beginning at 7pm.  This is a free concert sponsored in part by the Hispanic Heritage Society of Buffalo.

Jazzline featuring Jennie Jones will be at the Roycoft Friday, September 19th at 8pm

Christina Custode will be performing at the RAPA Theatre with her full band.  The Rochester Association of Performing Arts Theatre is on 727 E. Main Street in Rochester.  Shows this Sunday are at 1:30pm and 8:30pm as part of the Rochester Fringe Festival.

Jazz guitarist Charlie Hunter, along with drummer Scott Amendola, will be in concert this coming Tuesday beginning at 7pm at the 189 Public House in East Aurora.  Tickets are $20 at the door.  For more information on this unique duo, visit Charlie Hunter's website.  What to expect?  Here is a recent video of this funky jazz duo performing: