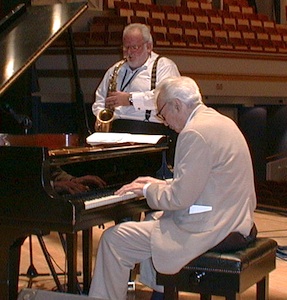 Last night served as a reminder of paying attention to the greatness in your own backyard.  When many of us get out of town visitors, we usually grin and bear the obligatory trip to Niagara Falls.  Forgetting, after all, that it is one of the wonders of the world.  With Bobby Militello, when we see him perform in various settings around Buffalo, this can easily happen also.  Forgetting he is one jazz artist who has reached the upper echelon of jazz artistry across the globe.

Bobby Militello brought his quartet to Puasa Art House last night with a determined mission to pay tribute to the man he accompanied for nearly thirty years – Dave Brubeck.  The first set (unfortunately all I could stay for) was on the level of being unmatched anywhere else in the country on this particular night.  What we all learned last night is Bobby Militello, as the front man on a mission, is about the best jazz you will ever hear.

The quartet opened with Dave Brubeck’s tune Blue Rondo a La Turk.  This familiar refrain set the stage for the night.  The quartet segued into a very bluesy version, whereby the middle portion of the song took you to a dark smoky blues room feeling and then back to the playful refrain.

Bobby then played the tune Unisphere, a piece Brubeck wrote in the early ‘60’s specifically for the famous New York World’s Fair structure.  On the tune The Duke, Militello used his flute and each note fluttered off this instrument like a flock of birds taking off.  Masterful and poignant it was.

On the Brubeck ballad, In Your Own Sweet Way, Bobby Jones on piano opened this number up with a mesmerizing concoction of melodic phrasing.  The entire group, including Jim Colemon on bass and John Bacon Jr. on drums, brought musical significance to this piece.

Militello then charmed us all with a vocal version of The Very Thought Of You.  An impressive ability to take certain phrases and stretches them into the use of the voice as an instrument.

The highlight of the first set was the Japanese influenced composition by Dave Brubeck called Koto Song.  Bobby shared his love for a special garden in Japan he thought of when playing this song.  It turns out Brubeck wrote this piece in the very garden Bobby referred to.  Bobby Jones gave us all a very memorable opening to this song and his timing put you physically in a Japanese garden.  Using his flute for this song, Militello entranced us all with catatonic humming while playing the flute at the same time.   A moving piece it was and also gave us a chance to witness the genius musicianship in Militello.  Here is Dave Brubeck in 1964 performing this gorgeoustune:

The first set ended with the ever-popular Take Five.  The groups as a whole gave it a fresh sound and made us forget the popularity of the song  – and helped us to remember the brilliance of the song.

I am sure there was more greatness in the second set.  But what we were reminded of last night is the gift we have in witnessing what others had witnessed with Dave Brubeck all over the globe – right here in our own backyard.