In 2014, we saw the resurgence of jazz in Buffalo gather steam – the most in a number of years.  Talent from young to the legends abounds in the Greater Buffalo area, which will make for an undoubtedly exciting year in 2015.

Ring in the New Year 2015 with jazz this weekend.   Here is a roundup of some of the hot jazz in town:

On Friday at 5:30pm, catch the Bates/White Project with Walt Sopicki at the A/K Café in the Albright-Know Art Gallery.

Friday at 8pm, the Jazz Example continues their weekly engagement at the Anchor Bar

On Saturday at 8pm, catch Latin Jazz band Sol Y Sombra for their weekly gig at the Anchor Bar led by Kevin Doyle 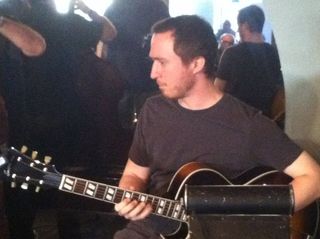 Saturday at 8pm at Shakti Yoga and Lounge on Grant Street in Buffalo, the Matt Michaud Trio with Abul-Rahman Qadir and Ben Levitt perform.  Matt, visiting from his new home in Denver, leads the group with his mastery of the jazz guitar.

Sunday at the Colored Musician's Club look for unusual poetry reading to start thte night off at 8:30pm followed by their Sunday jazz jam The Ronnie Davis Combo restarts it’s Saturday afternoon gigs at the Sportmen Tavern.  Also known as Lee Ron Zydeco in the area for his New Orleans Cajun Style music, Ron sheds that alter ego for organ-based jazz blues, soul, and R&B evoking the memories of Jimmy Smith.  See him and the combo on Saturdays at 3:30pm.  Also here is a link to Mary Kunz Goldman’s, of the Buffalo News, nice write-up:  Ronnie Davis

Thanks to all who participated in nominating your favorite jazz artists, bands, and supporters in the recent JazzBuffalo Nominations Survey.    The nominees have been collected and look for a separate posting with links to vote in the first-ever JazzBuffalo Reader’s and Fan Poll.