The weather may be cold but the jazz is hot.  It’s Buffalo so the music doesn’t stop.  I can imagine Eddie Jefferson singing such lyrics.  Here is a rundown of some of the notable jazz in town this weekend:

David Kane And Them Jazzbeards

Composer, arranger, and keyboard artist David Kane brings his band Them Jazzbeards to the Sportsmen Tavern this Saturday beginning at 9:30pm.  David Kane has opened for Goo Goo Dolls in his past as well produced several jazz-infused CD’s (Dirty White Loafers is a fav) in the late ‘90’s.  He has also received commissions to write musical film soundtrack scores for Nickel City Productions.  See a diversified band with diversified jazz-infused originals. 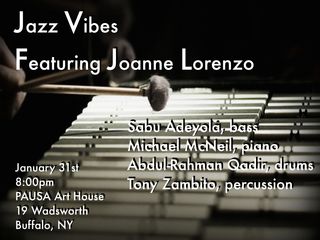 Jazz vibraphonist extraordinaire Joanne Lorenzo leads the band of Jazz Vibes once again at Pausa Art House this Saturday beginning at 8pm.  Catch a rare appearance by Joanne who is joined by the legendary jazz master Sabu Adeyola on bass, Michael McNeil on piano, Abdul-Rahman Qadir on drums, and Tony Zambito on percussion.  See one of the true masters of this unique instrument in jazz. 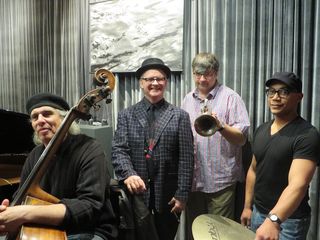 See Kevin Doyle on piano, Tim Clarke on trumpet, Mark Harris on bass, and David Phillips on drums as they do originals as well as music of Ornette Coleman and Chick Corea.  You catch this band at Pausa Art House this Friday beginning at 8pm.  I mean – Why Not?

Gruvology with Walter Kemp III and Bernard Kunz special guest Abdul-Rahman-Qadir on drums gets the weekend kicked off at happy hour from 6pm at Marotto’s Dubios Restaurant on Niagara Street in Buffalo.

On Thursday at 7pm at Merge you can see Mark Filsinger and the Hot Trad Five with Mark Filsinger on trumpet, Phil Sims on trombone, Candice Thomas on drums, and Jared Tinkham on guitar.

Saturday beginning at 8:30pm see All Hands with George Jones on piano at their weekly gig at Oliver’s Restaurant.

On Sunday at 9:00pm see Jazz Cache’ at Nietzsche’s with Ben Levitt on bass, David Phillips on drums, Tim Clarke on trumpet, and Michael McNeil on piano.

On Monday beginning at 7:30pm, you can stop in and see The Buffalo Brass Band Rehearsal led by Phil Sims at Iris Restaurant in Amherst.

Master classical and jazz trumpeter Peter Evans makes a rare stop in Buffalo Thursday February 5th at Pausa Art House.  Peter is with the band Mostly Other People Do The Killing, which has caused excitement and waves in the jazz world with their note for note reproduction of the Kind of Blue album by Miles Davis.

Next Friday February 6 at Pausa Art House catch David Glasser, the international jazz saxophonist who toured with Clark Terry, the Count Basie Band, and performed and recorded as a soloist.  The band Trio East will join him, which is out of Rochester.

A warm and special shout out to Jeff Miers of the Buffalo News for mention of the JazzBuffalo Readers and Fan Poll honors.  Eloquently stating the "future is in good hands" with the range of music and generations performing jazz.  With the support of people like Jeff Miers, the future truly is in good hands.