In addition to three events posted in JazzBuffalo on Tuesday consisting of Peter Evans, David Glasser, and the Atomic Jazz Group, there is even more great jazz throughout Western New York.  From duos to groups, there is plenty of jazz available to your liking.  Here is a rundown:

Extraordinaire classical and jazz guitarists Mir Ali makes a debut appearance at Pausa Art House this Saturday beginning at 8pm.  Mir Ali is acclaimed worldwide as a performer as well as a panelist for numerous international guitar competitions.  He will be making a rare appearance with his group Ghetto Gitano.  Admission is $15 and reservations recommended.  Here is a video preview: 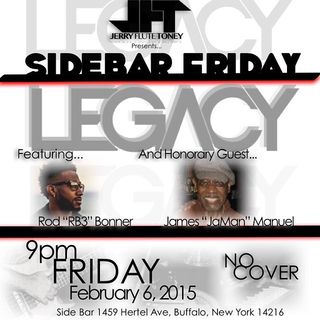 The jazz-funk and soul group JFT led by Toney Rhodes plays Sidebar on Hertel this Friday beginning at 9pm.  The band will celebrate the legacy of James "JaMan" Manuel who will be honorary guest and also feature Rod "RB3" Bonner.  JFT is Toney Rhodes on keyboards, Jerry Livingston on electric bass, and Flute on drums.

French-born jazz and world music guitarist Stephane Wrembel comes into town this Friday at 9:30pm at the Sportsmen Tavern (tickets $20).  Wrembel is influenced by Django Rheinhart and received a scholarship to the Berklee School of Music.  He also collaborated with Woody Allen on two soundtrack songs for the movies Midnight in Paris and Vicky Cristina Barcelona.  Here is a preview:

See the Jazz Example, led Doug “Trigger” Gaston on keyboards, Bilal Abdullah on sax, Greg Piontek on bass, Lester Robinson on drums, and Chuck Buffamonte on guitar this Friday beginning at 8pm at the Anchor Bar

Saturday from noon until 2pm, the Gruvology Duo of Bernard Kunz and Walter Kemp III will be at the Hydraulic Earth Restaurant in Larkin District of Buffalo

Saturday beginning at 8:30pm see All Hands with George Jones on piano, Bill Staebell on bass, and John Bacon, Jr. on drums at their weekly gig at Oliver’s Restaurant