Okay – under the weather but better late than never.    The weather may be getting the best of us but the best of jazz in Buffalo still is available.   Here are some of the best Jazz In Town events for this weekend:

A Night of Gypsy Swing 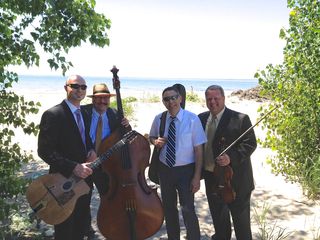 The Hot Club Of Buffalo performs this Saturday at 8pm at the Roycorft Inn.   This event is part of the 4th annual Musical Journey season supporting the long-standing mission, inspired by Elbert Hubbard's own Little Journey series. The proceeds of the "Musical Journey" series benefits the Roycroft Campus Corporation's Education Programs.  Here’s what Roycroft says about the Hot Club of Buffalo:

Performing for the evening is The Hot Club of Buffalo who approaches this happy music with a modern sensibility; their passionate improvisations and toe-tapping rhythms engage both listeners and dancers alike. The group performs entirely on acoustic instruments. The guitars, strings, and even the picks are specially chosen to get that unique gypsy sound!

Tickets are $30 but benefit a good cause. 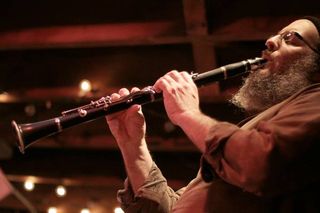 Hallwalls continues its fabulous mission of bringing world-class jazz, mainly in the free jazz genre, to Buffalo.  Monday beginning at 8pm is no exception.  Here is the write up by Hallwalls:

The Renga Ensemble was convened by clarinetist and composer James Falzone for a series of concerts and a recording in April, 2013 in Chicago. The ensemble was handpicked by Falzone, drawing together some of the most diverse and adventurous clarinet and saxophone players working in jazz and improvised music today:

The conception of the project is rooted in persona: how do diverse musical voices converge and find common ground, especially in a setting where composed and improvised elements coalesce? The intention in assembling such diverse players, most of whom had never played together before, was to allow space for each voice to be heard yet challenged and shaped by another, equally strong voice.

James named the group Renga after a centuries-old form of collaborative Japanese poetry, where two or three poets blend their words into a single meditative work. James' compositions, written especially for this project, were conceived around a haiku by American poet Anita Virgil. The titles of the 5 main compositions make up her stunningly clear poem:

Not Seeing
The Room Is
White
Until
That Red Apple

Six other shorter pieces were conceived as soundscapes for each member of the ensemble to improvise within, the written material assembled by James as a personal statement on the soloist's musical vocabulary. Additionally, the group creates fully improvised pieces making use of the full spectrum of clarinets, from the low contrabass to the high Eb.

Here is a YouTube video of the Renga Ensemble: 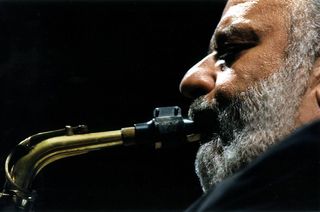 The Bobby Militello Quartet returns to Pausa Art House this Friday beginning at 8pm.  This home based band features Bobby Militello on sax and flute, Bobby Jones on piano, Jim Colemon on bass, and John Bacon, Jr. on drums.  The band chemistry, honed from years of playing together, makes for spectacular jazz.

Check out the Phil Sims Jazz Quartet at the Roycroft Inn Friday at 8pm with Phil Sims on trombone, Tom Kasperek on drums, Warren Stirtzinger on guitar, and 2014 Jazz Bass Of The Year Paul Zapalowski.

See the bands ABT and Blue Stone Groove at Milkie’s on Saturday beginning at 8pm.

At 8:30 on Saturday you can catch All Hands at Oliver’s Restaurant

On Tuesday, catch NeoSoul Tuesday night at 8:30pm at Duke’s Bohemian Groove Bar with Verse and special guest Preach Freedom from Rusted Roots.  Here is the write up by guitarist Michael DiSanto:

The club goes up on a Tuesday! Call 240-9359 to reserve a table for this very special addition with Preach Freedom from Rusted Roots with Verse! Preach is a singer, songwriter, composer, percussionist, multi-instrumentalist, teaching artist, and proud father, Preach Freedom’s music draws from American Afro-Native Soul music, West African rhythms, and the human experience. Africa, Haití, Puerto Rico, Cuba… sticks, stones, animals, metals, gourds and animal hides. Music inspired by enslaved people of Africa, which includes spirituals, blues, jazz, soul, and rock and roll…South America, and the indigenous people of North America. American Afro-Native Soul Music.  His music raises consciousness. His music is danceable, joyful, ageless and honest. It is full of history. It's message is "edu-taining", agitating, it is peaceful, and it is powerful, drawing from personal experience and life. Preach Freedom sings songs of freedom to our youth, "the key to the future". Preach Freedom makes music for the people!