On Wednesday, May 20 at 7:30pm, the Buffalo area gets a visit from two jazz artists who have earned a respected place among audiences and jazz musicians alike.   Venerable saxophonist Houston Person will be joining four-time Grammy nominated jazz vocalist Karin Allyson for the annual Legends of Jazz Series held each year at Williamsville East High School.

Person is considered a master of the tenor saxophone.  Playing a wide spectrum of jazz from the standards to soul jazz, which he was one of the pioneers of soul jazz in the mid-60s to the early ‘70s on the Prestige label.  In 1982, he was awarded the Eubie Blake Jazz Award.  Houston Person has accompanied many of the jazz greats as a sideman or as the lead.  These include such prominent names as Charles Earland, Lena Horne, Etta Jones, Horace Silver, Ron Carter, and Cedar Walton.  Person is noted for his brassy and expressive resonating sound.  Here is a clip of Houston Person performing Moonlight In Vermont with a Buffalo's favorite Joey DeFrancesco: 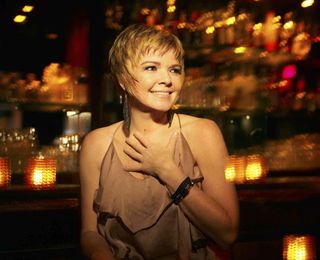 Karin Allyson, since the early ‘90s, has released 13 albums, of which 4 received Grammy nominations.    Allyson has performed with versatility in the genres of some of the most notable songwriters in the world, from the Great American Songbook to Bossa Nova.  Including covering the works of Duke Ellington, Thelonious Monk, John Coltrane, and even the songs of Joni Mitchell as well as Bonnie Raitt.  Allyson is a classically educated pianist who found jazz while in college and launched a career as a singer in Kansas City.  Since, she has graced some of the biggest jazz stages, such as the Newport Jazz Festival.  Allyson is also noted for her versatility in scat and vocalese.  Here is a clip of Karin Allyson performing the classic Moanin’

These two jazz artists performing together should make for one special night of jazz!  The concert will feature Williamsville East HS jazz ensemble students under the direction of Wayne Moose.  For tickets, which are $15, contact legendsofjazz@gmail.com or call 716-626-8425.  Seats are limited and this series, in its 9th year, usually sells out.