The first Sunday Afternoon Jazz Series concert took place yesterday at 189 Public House in East Aurora.  If you missed it, you missed a spectacular two sets put on by Phil DiRe and Friends.  The two masters of the saxophone, Phil DiRe and Dave Schiavone, had brilliant individual and group moments, which kept you in awe.   Hearing at times explosive, as well as, beautiful mellow sounds echoing off the brick walls.

The band included George Caldwell on keyboards, John Hasselback, Jr. on trombone, John Bacon, Jr. on drums, and Jim Colemon on bass.  Bacon’s groove was impeccable yesterday and Colemon was right there alongside giving the rest of the band smooth sailing to go off in different directions.  Giving the others the ability to find their way back home to the groove.

What a fantastic start it was and many thanks to the partnership with Clark Crook and 189 Public House for making jazz possible on Sunday afternoons.

The Sunday Afternoon Jazz Series is starting to fill out.  This partnership between JazzBuffalo and 189 Public House aims to schedule every third Sunday of the month.  But do check the schedule for it may vary by a week in a given month.  We will aim to present a variety from the young to the venerable legends.  And, we will present from mainstream to modern jazz genres as well.

Next up though, in only two weeks on May 31 as we start with two performances in one month, is Carina and The Six String Preacher.  They are a band uniquely specializing in Jazz Noir and the balance of vocals and guitars.   I am sure they will have you spellbound during their performance so don’t miss this.

On June 21st, we will have the Blue Stone Groove, consisting of some of the younger jazz players in our community such as vocalist Einat Agmon and saxophonist Ellen Pieroni.  Following this appearance will be the sounds of vocalist Steve Balesteri on July 19, who promises a jazz-oriented concert showcasing his strong vocals.

New shows added for August, September, and October include:

Mark you calendar for these special Sunday afternoon appearances.  This is a chance to celebrate jazz in a relaxing yet stupendous venue for music.  See you there! 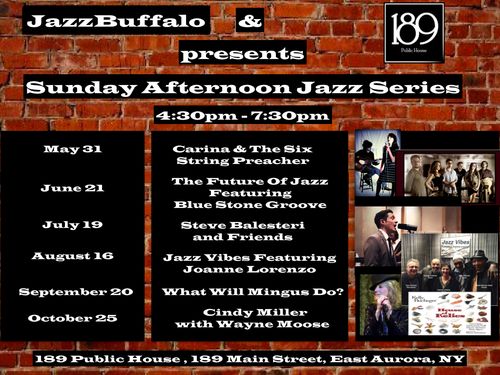