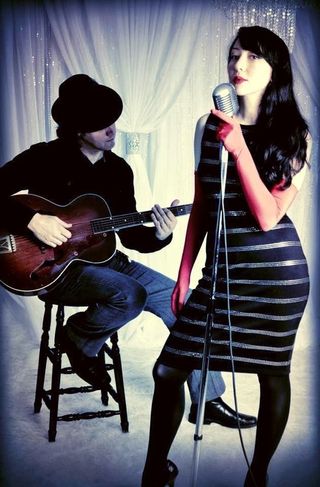 This Sunday, May 31st, the Sunday Afternoon Jazz Series continues at 189 Public House in East Aurora.   JazzBuffalo and 189 Public House is extremely excited to bring to you the talented trio, which represent Carina and The Six String Preacher.

The band evokes the spirit of early jazz noir with the smoked ambiance and the sultry smoked vocals of Carina Mastrantonio.  The band formed a few short years ago and is a collaboration between noted jazz-fusion guitarist and composer Vincent Mastrantonio and Carina, who hails from New York City, cutting her chops as an indie rock singer and songwriter.  Noted Buffalo drummer John Brady rounds out the trio. In 2013, they released their debut album Liquid Think.  A beauty it is.  Cool, sultry, and can easily transport yourself to a smoke-filled jazz club somewhere in the heart of Paris.  They are currently working on a new release to be entitled – Why You So Wild, Crocodile?

Here is their first music video entitled Cabin Fever.  Yes, it has been posted before but it is a dandy you cannot get sick of.  Be sure to get out to 189 Public House on 189 Main Street in East Aurora.  Sunday, May 31st at 4:30pm this special show begins.  See you there!

One thought on “SAJS: Carina And The Six String Preacher This Sunday At 189 Public House!”