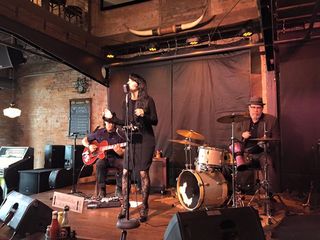 Carina and The Six String Preacher put on a great performance for the second of the Sunday Afternoon Jazz Series at 189 Public House in East Aurora.   Carina Mastrantonio vocals were a perfect blend of melodic phrasing and range as the band showed impressive versatility.  Vince Mastrantonio on guitar and John Brady on drums were masterful in creating the echoing sounds, which gave Carina a mood setting backdrop.

Especially liked their originals Cabin Fever and the forthcoming release of a new song, Forget About Me.   The band shines and Carina’s vocals are catchy and captivating.  They also took pop and crossed over into a Les Paul and Mary Ford likeness.  Included such songs as Ain’t No Sunshine, Sweet Dreams Are Made Of This, and My Baby Gotta A Caddy.  The Sonny Bono song Bang Bang written for Cher and later recorded by Nancy Sinatra was a special highlight.  Carina keeps you spellbound with a version closer to Nancy Sinatra.  Jazz standards such as Billie Holiday’s Don’t Explain and How High The Moon augmented a performance that varied in tempos yet when it was over – you knew you just saw something special.

Next up in the Sunday Jazz Series is the event billed as The Future of Jazz featuring Blue Stone Groove.  We have a stable of young jazz artists in the Greater Buffalo area who are enriching the jazz community.  On this Sunday, June 21st, we will celebrate and showcase the rising stars of jazz.  Dave Pinchoff, of Blues Stone Groove and a jazz community leader, is helping to get the word out to the many young jazz artists in the area.  And, don’t miss the dynamic jazz bluesy sounds of Blues Stone Groove!

(We also realize it is Father’s Day that particular Sunday – so what a great way to spend the late afternoon to early evening with your Dads!  Bring them to 189 Public House for good eats and great music!)

Many thanks to Clark Crook for the partnering to host the series and to the wonderful staff at 189 Public House!

More to come but plan for June 21st!