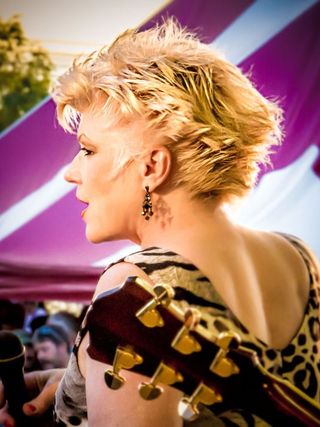 On June 19th, at the Premier Cabaret in MusicalFare Theatre, critically acclaimed international jazz vocalist Nancy Kelly will hit the stage.  Not by herself either!  She is bringing along a rhythm section, in which each is a jazz star in their own rights.  Accompanying Nancy Kelly will be Dino Losito on organ, Jerry Weldon on sax, and Buffalo born Carmen Intorre, Jr. on drums.

For the last three decades, Nancy Kelly has been busy lighting up the stage worldwide and found time to make five highly acclaimed albums.  Her latest, B That Way, has been on top of the Billboard Jazz Charts for quite some time.  She has performed in a variety of festivals and venues from the east coast to the west coast of the United States.  Including, Birdland and The Blue Note in New York City.  Her travels have had her performing at The Meridian in Paris, France, Birdland in Japan, The “Q” Club in Turkey, and Somersets International Jazz Club in Singapore.

Nancy Kelly was voted “Best Female Jazz Vocalist” two times in the Down Beat Reader’s Poll.  And, when she puts out an album, they find their way to the top of the charts.  Her first album “Live Jazz” topped out at number 11 on the Billboard Jazz Charts.  Her latest, B That Way, stayed in the Top 50 on the National Jazz Week charts for a solid 8 weeks.

Have we mentioned who she has played with?  She has appeared, over the years, with Dizzy Gillespie, Mark Murphy, The Nelson Riddle Orchestra, George Benson, Chick Corea, McCoy Tyner, Houston Person, and the list goes on and on!  Noted for her swinging BeBop style of singing and is often referred to as the lady who was Born To Swing.

Here is a short video clip of Nancy Kelly in performance:

Buffalo, don’t miss this rare chance to see Nancy Kelly before she heads to the Rochester International Jazz Festival.   Dino Losito, Jerry Weldon, and Carmen Intorre, Jr. are recording jazz stars in their own rights and each brings a who’s who of jazz accompaniment lists with them.  You will not want to miss this incredible evening of jazz.

Many thanks to Randy Kramer and MusicalFare Theatre for this great partnership with JazzBuffalo to bring highly acclaimed jazz to Buffalo.  See you there!