The amount of jazz about to hit the Buffalo area this weekend and beyond is amazingly incredible.  We have festivals and concerts presenting the best in talent throughout WNY!  Pack a backpack with plenty of water and nourishment as you take in the great sounds of jazz. 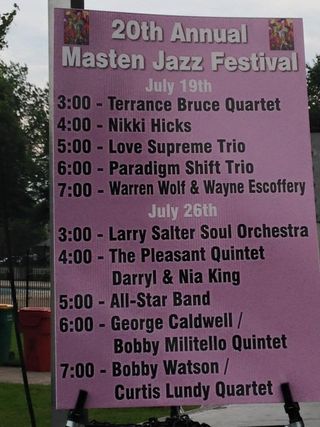 This weekend also marks the 20th annual Masten District Jazz Festival.  This year, the second weekend will be held Sunday, July 26 beginning at 3:00pm at Martin Luther King Park across from the Buffalo Science Museum.  The line-up features the Larry Salter Orchestra, George Caldwell, Bobby Militello and featured jazz artists Bobby Watson on saxophone and Curtis Lundy on bass.  Check out this video of Bobby Watson with Curtis Lundy from a CD in 1983 with Mulgrew Miller and Kenny Washington: 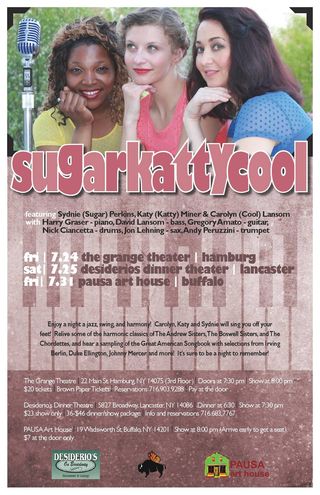 This Friday, July 24th at 8pm kicks of the first of three shows billed as SugarKattyCool, a tribute to the swinging jazz singer of the Andrew sisters and the Great American Songbook.  This unique project stars Carolyn Lansom, Sydnie Perkins, and Katy Minor on vocals.  The band will consist of Andy Peruzzini on trumpet, Jon Lehning on sax, Harry Graser on piano, Dave Lansom on bass, Greg Skulicz on guitar, and Nicholas Ciancetta on drums.  The first show will be at the Grange Theater in Hamburg, the second show on 7/25 will be at Desidieros, and the third show will be on 7/31 at Pausa Art House. 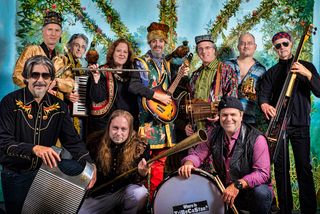 Pausa Art House features a true international and world music jazz event this Friday, July 24th at 8pm.  The band TriBeCaStan makes an appearance at Pausa – a band the New York Times describes what they do as “genre-bending jazz and world-music”, while the Washington Post calls them “an international jazz and folk festival unto itself… bold and dazzling.”   Here’s more from Jon Nelson of Pausa:

The band delivers an exciting show full of exotic instruments and global influences, but blended into an entirely accessible brew of folk, rock, blues, funk, and the uniquely native idiom of jazz—with a line-up of superb musicians who've worked with the likes of Ornette Coleman, Taj Mahal, James Brown, Sting, Santana, and John McLaughlin, to name just a few.

Check out the video to get a worldly sense of what is going to happen on that Friday night:

On Monday, July 27th catch another homecoming when bassist extraordinaire returns to perform with the Cameron Kayne Ensemble (with George Caldwell and Matt Michaud) at the Sportsman Tavern beginning at 7pm.  Following Cameron will be the young vibraphonist Alec Dube and his ensemble at 8pm.  The featured performance of the evening comes from the Dave Kayne led The Western New York Jazz Orchestra beginning at 9pm.

Wednesday Night Jazz at Mezza Restaurant, on Wednesday, July 22 at 6:30pm heralds the home visit by vocalist Mike Costley.  A dynamic jazz vocalist, living in the LA and Palm Springs area, with roots in Buffalo.  And if you cannot get enough on Wednesday, head over to the steps of the Albright-Knox Art Gallery for The Buffalo News – Albright-Knox Art Gallery Summer Jazz Series, which features Mike Costely at 2pm.  For a taste, here is Mike Costley in January of this year (yes – note no winter coats!):

On Wednesday July 22 catch the Jazz Cache at Nietzsche’s beginning at 9pm with another chance to hear Matt Michaud on guitar – home from Colorado with Jared Tinkham on guitar, Ben Levitt on bass, Mark Filsinger on trumpet, and David Phillips on drums.

On Friday, July 24th at 9pm you can see the Johanna Batt Duo with Phil Sims at Saigon Café

On Sunday, July 26 in the Stir Lounge of the Seneca Niagara Casino in Niagara Falls, see the dancing big sounds of the Jim Tudini Big Band from 1pm to 5pm

On Sunday, July 26 see the Jon Lehning Quartet at Swistons beginning at 6:30pm.  A group of young as well as up and coming jazz artists in Buffalo

On Sunday, July 26, at 7pm, see jazz vocalist Barbara Levy Daniels in an appearance outdoors at Richard Pascucci Memorial Band Shell in Lancaster.  Performing with the Lancaster Town Band, Barbara will fill the summer night with the song.  Be sure to check out her two latest CD’s, which are fabulous.  Here is a video of Barbara performing with Houston Pearson at The Metropolitan Room in New York City: