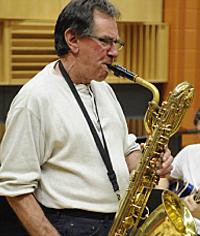 On Wednesday, August 12th, Wednesday Night Jazz resumes. Hosted by bassist extraordinaire Wayne Moose.  Special guest for the evening is quiet special indeed.  Bruce Johnstone will be featured for the evening.  Bruce has legendary status among the Greater Buffalo jazz community.  And, for good reasons!

Here is a personal message from Wayne Moose and his most appropriate backgrounder on Bruce Johnstone:

This week is a special one, Bruce Johnstone is on the gig after his surgery. I am hoping everyone can stop in for a little while to welcome him back. I played a few gigs with him in July near Fredonia and he sounded great. I am sure most of you have had the privilege of working with Bruce over the years. We are very lucky to have one of the best Baritone Saxophonists in the world living in our area. Here is a little more on Bruce:

Bruce Johnstone’s first exposure to American audiences was as a member of Maynard Ferguson’s band in 1972.  He recorded three albums with the Ferguson Band which, along with live concert appearances placed him in the #3 spot in Down Beat Magazine’s Readers Poll behind Gerry Mulligan and Pepper Adams.

He held this position for the next ten years.

Leaving Ferguson in 1976, he moved to N.Y., signed with Arista’s new Freedom label and with co-leaders Rick Petrone and Joe Corsello formed the new Jazz Fusion band New York Mary.  Both albums produced by this band met with great critical success. While in N.Y. Bruce also recorded with Anthony Braxton (Creative Orchestra Music 1976) with blues singer Luther Allison. (The horn section being Michael and Randy Brecker, Lew DelGatto and Bruce Johnstone.) In 1977 Bruce joined The Woody Herman Band and toured and recorded with the band until April 1978.

Since 1978, he has lived and worked in Western N.Y.(primarily Buffalo N.Y. and Erie PA) and maintains a busy concert/clinic schedule including appearances with The Dave Stevens Big Band, The Buffalo Brass, The Erie Philharmonic Pops, The Bemus Bay Pops, his own small groups and with The Don Menza Octet.  He is currently Director of Jazz Studies at SUNY Fredonia.

As you can see, Bruce Johnstone has enjoyed a rich history with jazz.  Make it out to Mezza Restaurant at 6:30pm to see one of the true legends of jazz.  Here is a clip of Bruce Johnstone performing in 2014 for a special concert: