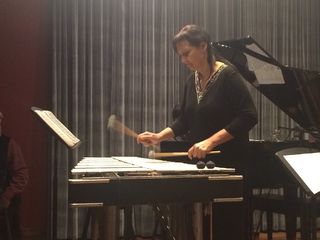 The JazzBuffalo Sunday Jazz Series, in partnership with 189 Public House, takes place once again on Sunday, August 16th.    Note the new start time of 5:30pm.  Since May, each third Sunday of the month has been exceptional.  This coming Sunday is certainly going to be special!

Jazz Vibes Featuring Joanne Lorenzo makes an appearance on the stage at 189 Public House (189 Main St., East Aurora, NY).  Vibraphonist Joanne Lorenzo has been one of the areas premier jazz musicians since her days performing with the late great pianist Al Tinney.  Joanne holds a Masters Degree in Music from the University of Michigan.  Today, she devotes much of her time to serving as the Executive Director of The Magdalene Project.  A non-profit organization dedicated to reaching out to women who are homeless a or involved in domestic abuse.  In addition, the organization provides after-school care for children and social activities for women.

Rounding out the ensemble is a cast of jazz musicians with impressive credits.

Sabu Adeyola, on bass, is a former student of Charles Mingus and went on to be Ahmed Jamal’s principal bassist for a number of years as well as recordings.  He and Joanne shared a history of also performing together with Al Tinney.

On keyboards will be George Caldwell.  A master pianist and jazz educator, George has a list of musical credits impossible to put in this short posting.  Most notable, however, is George spent seven years with the Count Basie Orchestra under the direction of Frank Foster.  The live recording of the band at the Manchester Craftmen’s Guild produced a Grammy Award win for the Count Basie Band in 1996.

On drums will be Abdul-Rahman Qadir, one of Buffalo’s “go-to” drummers.  Abdul has a rich history of playing with many of the area’s jazz greats since the early days of the Buffalo Jazz Ensemble and Grover Washington Jr.

I will be humbled and privileged to sit in, the only time during this seven months jazz series, on percussions.  Each time this Jazz Vibes group has gathered, albeit infrequently, it has been an occasion of momentous chemistry.   Make plans to see Jazz Vibes Featuring Joanne Lorenzo Sunday, August 16th, at 5:30pm at 189 Public House in East Aurora.  Sparks are sure to fly!

Exciting line up for the remaining months include:

September 20th: What Would Mingus Do?