When good friends get together and you put talent on top of that – good things are bound to happen.  And, happen they did – two memorable performances and one super review. 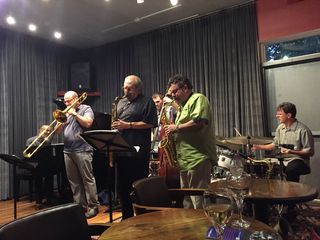 On Friday, August 21 at Pausa Art House, Phil DiRe gathered some friends to put on a solid band performance.  The talented group of Phil DiRe on tenor sax, Dave Schiavone on alto and tenor sax, John Bacon, Jr. on drums, Wayne Moose on bass, John Hasselback, Jr. on trombone, and George Caldwell on piano shine – both collectively and individually.  Adding to this music event was the appearance of young John Hasselback, III on trumpet, home from college and with a proud Mom and Dad looking on.

Phil Dire was masterful on his solos yet played conductor in giving each of these talented musicians a chance to express freely.  Wayne Moose, on his 19th-century upright bass, and John Bacon, Jr. locked in tight and gave the band some legs to stand on.  This was made evident on the Don Menza tune entitled Faviana.  Moose and Bacon locked in on a rhythmic swing, leaving ample room for DiRe, Schiavone, Hasselback, and Caldwell to take turns taking the song through a variety of melodic directions. 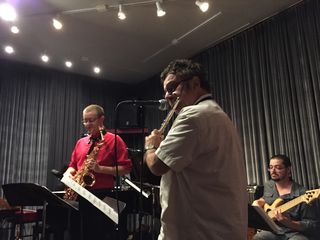 Saturday, August 22nd also at Pausa Art House, found a gathering of a different kind.  A group determined to take on the challenging music of the Chick Corea Elektric Band.  A band Corea formed post-Return To Forever, which embodied a jazz-rock and jazz-funk sound.  Stretching the jazz-fusion aspects of music further into an electric mode with electric guitar and use of electric synthesizers.  Jon Lehning proved the capable band arranger on alto sax with the mentor Dave Schiavone filling in on tenor sax and flute.  Rounding out the band were Harry Graser on piano and keyboards, Adam Bronstein on guitar, Paul Yates on bass, and David “Teaspoon” Hulett on drums.

This young group laid down some very energizing tracks, with Jon Lehning leading the band on arrangements.  Harry Graser, the young pianist displayed amazing dexterity in playing the keyboards and piano simultaneously at times and showing improvisational lines with a maturity way beyond his years.  Hulett brought highly proficient funk to the band with impeccable timing.  And, it was needed for many of the songs were very up-tempo.   Bronstein and Yates each added respective fusion-laced licks on guitar and bass. Highlights were several moments of the student and the teacher in a locked-in synchronous duet together.

If anyone doubts the young and the future of jazz in Buffalo, doubt no more.  With the likes of the impressive playing and arranging of Jon Lehning and the improvisational talents of Harry Graser, the future is in good hands!