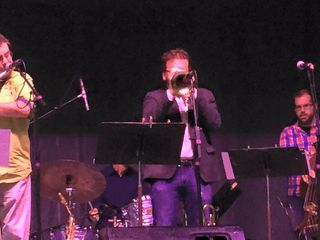 Blessed with beautiful weather and minus the humidity, which can make for an unpleasant sweaty affair for both audience and musician, the Lewiston Jazz Festival kicked off last night.

The first night proved to be a blend of new upcoming jazz artists blending with some venerable veterans.  The Jamie Holka Quartet also stretched the spectrum of jazz whereby you heard rock-infused jazz on the Frontier House Porch.  Which, may have had some audiences confusing Friday with a Tuesday Artpark event.   Yet, like the food on Center Street, there was very tasteful jazz  for those who like the quiet sounds of jazz.  Dave Seigfried on bass and Mike Moser on guitar provided the perfect antidote to a hectic week with their performance.

While there were several performances happening simultaneously, originality stood out as the breath of fresh air last night.  Top on the list was the work of Mark Filisinger.  Preceding him was his work with Buffalo State students.  Admirable in itself.  But when Mark took the stage with legend Dave Schaivone on sax, Danny Ziemann on bass, Harry Graser on keyboards, and Devin Kelly on drums – the beauty of the music matched the beauty of the evening sky.

Filsinger’s original compositions and arrangements were an impressive array of ballads to up-tempo scores.  The ballad “For Other Tune” gave ample room for the hypnotic sound of Filsinger’s flugelhorn and Schiavone’s saxophone to envelope the audience.  The tune “Siena” provided a showcase for the stellar bassist Danny Ziemann to open and end the tune with inventive lines meant to mimic the siren used by European police and ambulances. 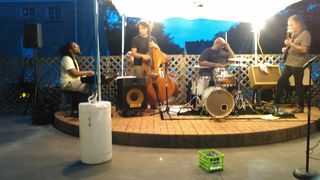 Gruvology made an appearance in the Lewiston Peace Garden and with special guest Syl Dubenion on sax, and showed why they are winning audiences over with their brand of jazz.  Originality marks each of their tunes with members Bernard Kunz on guitar, James Bender on bass, David “Teaspoon” Hulett on drums, and Walter Kemp III on keyboards blending into a mix of sounds holding the audience in a spell.  The composing team of Kemp III and Kunz bring an infectious melodic nature to their songs that is hard to walk away from at a festival.  (Thanks to William Walsh for photo)

Another highlight was the performance of Ralph Fava on guitar with Bobby Jones on keyboards, Buddy Fadale on bass, and Carmen Intorre on drums.  While they played traditional and classic jazz tunes, the group brought much originality to them.  Fava’s strums and solos were classic while Intorre and Fadale gave Jones and Fava a strong backline.

The headliner was Ron Corsaro and the Upstate Express.  (It should be noted that the policy of charging $20 VIP for headliner seats should be revisited.  The band played to the audience outside of the sectioned off area while empty seats sat in front of the stage.)  The ensemble did shine with a big band sound.  Especially Russ Carere on alto sax and the punching trumpet sound of Tim Clarke.

Today, Saturday, should see a near record crowd attend with nice weather in the forecast.  It will undoubtedly be difficult for some avid jazz fans to filter their way through the social festival attendees.  But I am sure their efforts will be rewarded.  For more information see: Jazz In Town