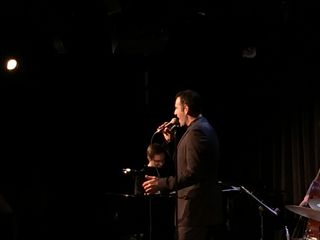 It began with the tune Just A Lucky So and So last night.   The 1945 Duke Ellington song with lyrics by Mack David.  It did seem that everyone who met gave each other friendly hellos and hugs.  Each feeling, with tickets all sold out, just lucky to be part of Paul Marinaro’s homecoming concert at MusicalFare Premier Cabaret Lounge.  And, what a homecoming it was.

Backed by a world-class trio of jazz musicians in Ben Paterson on piano, John Tate on bass, and Carmen Intorre, Jr. on drums, Marinaro put on a dazzling show.  A show, which felt like you were in the living room of his family’s home.  Comfortably sharing stories about each song, laughing it up with the band, and being urged on by the large contingent of Marinaro family members in the audience.  By the end of the evening, you would not have minded your last name being referred to as Marinaro for few hours.

Telling the story of how he came upon his father’s old 78RPM vinyl recording of That Old Black Magic, Paul launched into a swinging version that began with a subtle yet hard swing intro by Intorre on drums.  An example how Marinaro let the band shine in their moments.  On Devil May Care, the superb intro on bass only with John Tate was captivating and included space for Ben Paterson to solo.  Showcasing this amazingly gifted pianist talents.  His piano lyrical style on Don’cha Go Away Mad evoked feelings of Fats Waller like madness indeed.

Paul weaved in stories about his past and chasing dreams.  With a nice intro opening with John Tate on bass, he sang I’ve Got The World On A String like a man who is chasing a dream and is getting closer to catching it.  With a recent release of a CD and live CD in the works as well as a uniquely packaged Vinyl edition of the Without A Song concept album,  there is no doubt Marinaro is ascending in the world of jazz. 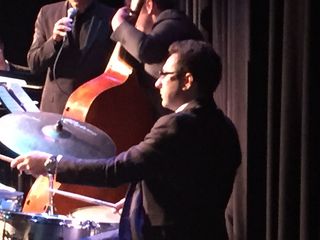 On Jobim’s Outra Vez, Paul’s story of faking Portuguese language for a while with the use of Sicilian, shall we say dialect, brought roars of laughter from the audience.  However, when he began, Marinaro’s vocals shows amazing control and accentuating of notes as well as lyrics; a thing of beauty as is the song.  The song also showcased the improvisational skills of Carmen Intorre on drums with unique shifts in patterns on this Bossa Nova tune.  On the song Caravan, the band’s rhythmic excellence, as well as, an Intorre solo backed the impressive vocal styling of Marinaro. 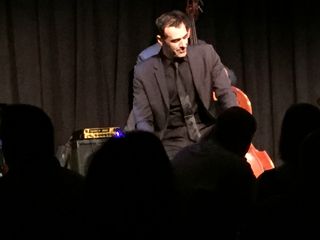 Marinaro ended the night with the tune Here’s To Life, Shirley Horn’s signature song.  Beforehand, talking about still chasing the dream and having no regrets in doing so.  The move to Chicago being a calling he had to follow to see if he can catch the dream of being a jazz singer.  The lyrics sang in a heartfelt way with deep moving resonance whereby the audience was visibly moved to a standing ovation.  You see, the lyrics sum it up:

A lucky night for many of us it was.   Including having the presence of jazz royalty in the audience as the daughter of Oscar Peterson attended this show.  Paul Marinaro will be here for two more shows.  Chasing the dream.  If you are not one of the lucky ones with a ticket, get his Without A Song CD and upcoming live CD.  You will undoubtedly feel you are part of a large extended Marinaro family.

One thought on “JazzBuffalo Review: A Fabulous Night Of Chasing The Dream With Paul Marinaro”