Jazz and spirituality has always been closely intertwined.  Many a jazz musician throughout the past few decades, such as John Coltrane and Ornette Coleman, spoke of their desires and aims to achieve a deep spiritual connection through music.  This week in JazzBuffalo, coinciding with the visit of Pope Francis, has jazz and spirit melding in more ways than one.

Jazz Concert For The Magdalene Project 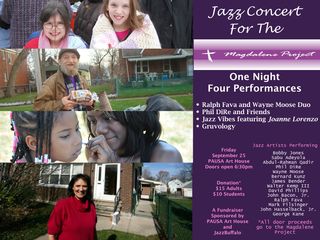 Some of the top jazz artists in the area are coming together to provide support and generosity for the Magdalene Project.  A spiritually faith-based organization dedicated to meeting the needs of those in need from domestic abuse, drug abuse, prostitution, and general impoverishes.  Joanne Lorenzo, who also is one of the most gifted vibraphonists in the area, leads this mission.  The jazz concert, to be held at Pausa Art House beginning at 7:30pm will feature four distinct performances: The Ralph Fava and Wayne Moose Duo, Phil DiRe and Friends, Jazz Vibes, and Gruvology.  Donations of $15 adults and $10 students gets you entry with the proceeds going directly to the Magdalene Project.  For more information go here:  Jazz Concert For The Magdalene Project

A special event is taking place on Thursday, September 24th from 6pm to 9pm at the Burchfield Penney Art Center and hosted by the Pappy Martin Jazz Society.  A Tribute To John Coltrane kicks off at 6pm with a showing of the film The World According To John Coltrane beginning at 6pm.  To be followed by a concert by the Herbie Small Quartet beginning at 7:30pm.  The event is free and open to the public.

This year marks the 50th anniversary of the landmark A Love Supreme recording by the legendary John Coltrane.   The work is considered Coltrane’s masterful ode to spirituality.  The quartet will play selections of music from this recording.

For many years, James “Pappy” Martin led the Love Supreme Jazz Ensemble locally as an accomplished tenor saxophonist.  As a community leader, he cofounded the Masten Jazz Festival and the Love Supreme School of Music.

History records that John Coltrane performed his masterpiece live only once in his lifetime on July 26, 1965.  This is the reported only surviving footage of his one and only live performance. 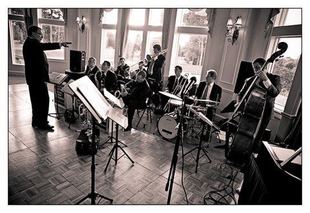 See Carina and The Six String Preacher with Dan Borodzik on Friday, September 25th at Milkie's beginning at 9pm

Catch Katy Miner's Heart, Mind and Soul tribute to '70's and beyond at Pausa Art House on Saturday, September 26 beginning at 8pm with Harr Graser, David Phillips, and Jack Kulp