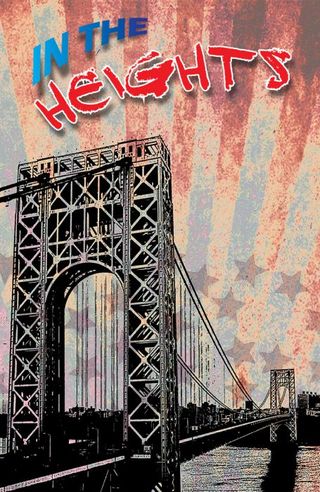 (Note: While not necessarily a jazz review, the story and the music has strong connections to Latin Jazz)

For many of us in Buffalo, we are connected to the story of immigrants.  No matter the continent our ancestors may have come from, in one way or another we’ve heard, as well as, experienced the struggles of our family history and those who braved coming to America.  As a first generation Italian-American who can relate, the story told in the magical musical, Lin-Manuel Miranda’s In The Heights, is very much the story of immigration, assimilation, and dreams for many of us.

Congratulations to Randy Kramer, Executive Director and Producer of MusicalFare Theatre and Victoria Perez, Co-founder and Artistic Director of Raices Theatre Company for their spirited collaboration on producing In The Heights.

The cast brings alive the streets of Washington Heights and hats off to set design by Chris Schenk for his strikingly authentic stage settings – graffiti included.  Set design is often not mentioned in reviews, but this set design superbly allowed for the cast and the audience to move with agility to the stories of each central character and families.

This is the kind of musical and story where it pays to have patience until Act II.  In the first Act, you are introduced to each of the family struggles of the many from Puerto Rico.   Ricky Marchese as Usnavi is the central character that keeps his departed parents store going in the heights.  Making use of hip hop rap lyricism to portray heart and emotions.

Dudney Joseph as Benny has some very sparkling moments in this show as the apprentice of Rosario’s Limo Service.  Joseph continues to evolve into a commanding presence on stage with vocals and acting.   Benny’s love interest with Nina, warmly portrayed by Elena Victoria Feliz as the college student who “made it out” of the heights but returns home after failing to make it at Stanford, is the heartbreak for the entire cast.  Especially the expert portrayal by Rolando Martin Gomes as Nina’s Dad Kevin, for it represents the struggle to reach the American Dream all immigrants, as well as parents, hope for their children.

Smirna Mercedes Perez as the elderly Abuela Claudia gives the strongest performance.  Vividly emotional in acting and in song, you are drawn into her character.   Probably many of us will remember an elderly grandparent who represented the last tie to the old country.  Arianne Davidow as Vanessa plays the striking beauty to the T.  Strong vocals were matched by her character’s struggle – where beauty can be used to gain yet it can be a curse.

You are rewarded in Act II when all the characters come together with renewed hope and spirit of their American Dream.  Embodied by the sacrifice Kevin makes in selling his business to allow Nina to return to college.  The entire cast portrays the meaning of, as well as the significance of, sacrifice to the immigrant story.

Such a show could not be felt without the music putting you in the right context and spirit.  The musical direction of Theresa Quinn is outstanding and precise.  Her musical arrangements fit the emotions that Latin Jazz evokes and they also gave energy to the choreography.

The show runs through October 11th.  Highly recommended for it is a story of immigrants hoping to make it in America.  A story, which resonates with many of the families here in Buffalo.