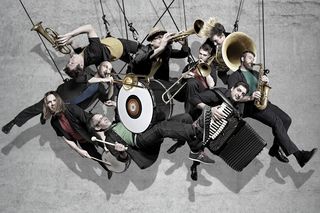 Last night, Saturday, October 3rd, the Art Of Jazz Series at the Albright-Knox Art Gallery returned after a hiatus of two years from the fifteen-year run produced by Bruce Eaton. You can say it was quite the celebration that ended with a festive party.   Jon Nelson, Artistic Director and Producer of the new series, may have had a party in mind as the perfect way to kick off the Art Of Jazz series.

Janne Siren, Peggy Pierce Elfvin Director of Albright-Knox Art Gallery and his staff put the welcome mat out yesterday for the nine-piece band Slavic Soul Party!  The band infuses Serbian and Balkan dance rhythms into a sound heavy on brass and minimalist percussions.  The percussions, however, are like the heartbeat of the Balkan-influenced music.  An addictive trance-like rhythm that just makes you unable to resist the need to dance.  As some audience members did and encouraged by the band.

The driving force behind the band is Matt Moran, who founded the group over a dozen years ago.  Playing the traditional Serbian bass drum (called a goch), his driving force is literal.  Prancing the stage as he leads each song with the infectious beat of the drum he carries.  The nine-piece band is much like a combustion of a marching band, a Serbian brass band, James Brown funk, gypsy jazz, and a jazz ensemble all wrapped up into a unique brand of music Moran envisioned.

The band opened with a tune called Sing Sing Cocek.  Composed as a result of the band’s volunteer, as well as missionary, efforts in performing in prisons.   The song was played with soulful funk and cocek in Serbian means a party-like form of song and dance.  An integral part of the band’s performance throughout the night was the introduction of the 9/8 rhythm.  Magnificently displayed and performed in their tune called Jackson.

One of the band’s most resounding playing last night was their interpretation of Duke Ellington’s Far East Suite.  Moran explained that while the Ellington orchestra was touring India and Afghanistan in 1963, with plans to travel further east, it was cut short by the JFK assassination.  Ellington composed the suite in response.  The band’s mix of the Balkan rhythm with the sweeping orchestral inflections unmistakable as the Ellington sound proved to be a highlight of the evening. 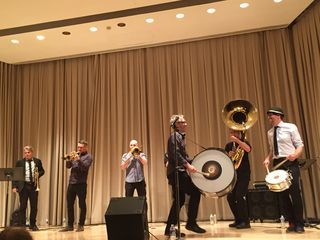 There were standout performances by the entire band.  Peter Stan, on accordion, was a unique revelation that this instrument can have a place in jazz.  Others included Kenny Warren on trumpet and Peter Hess on alto sax.   All though in fact were a superb collection of accordion, alto sax, two trumpets, two trombones, a Sousaphone (tuba), Moran’s goch bass drum, and snare drum.

The band alluded to a form of restraint last night.  Not in the music but how the audience must feel restrained sitting in their seats for the music is soulful and evokes instinctive needs to move and dance.  If ever in Brooklyn, you may want to catch this band in an open environment where they are known to move amongst the audience and create one giant dance party.  To give you a sense of what they were alluding to, check out this video of the band playing their tune Jackson right in the midst of the audience.

The Art of Jazz series began with a rousing party by Slavic Soul Party!  I am sure many who attended last night would echo this sentiment – it was a good night for the soul!