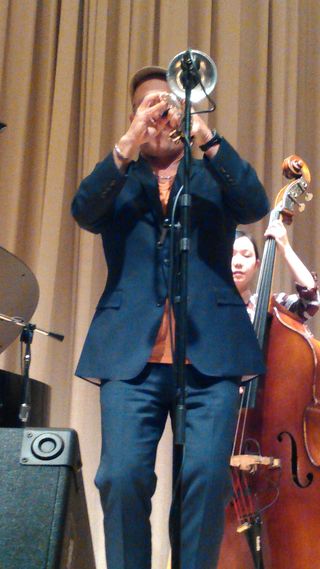 Trumpeter and composer Dave Douglas brought his quintet into town last night and found more than six enthusiastic people in attendance. Years ago, Douglas arrived in Buffalo during a snowstorm, driving down from a concert in Toronto, but the gig went on despite an audience of six people. Well, thankfully, nothing got in the way of stopping a near capacity energetic audience from experiencing the creative performances of this stellar quintet.

Jon Nelson, the artistic director and producer of the Art Of Jazz Series held at the Albright-Knox Art Gallery is serving up a compelling vision of jazz as a modern and contemporary artistic expression. The quintet, which strolled onto the stage last night belying the amount of expressive art about to take place, exemplifies the height of this vision that is taking place in the world of jazz today.

The improvisational quintet featured Jon Irabagon on tenor saxophone, Linda Oh on bass, Matt Mitchell on piano, and Rudy Royston on drums. Having been together with Douglas now for nearly three years, the band showed flawless interplay. Dave Douglas gives ample room for each musician to be expressive and the blend is magical.

The band opened with a tune called Hawaiian Punch from their recently released CD, Brazen Heart. Written as part of an ambitious goal to gig in all 50 states to honor Douglas’s 50th birthday two years ago. The tune is aptly named. The quintet wasted no time in delivering energetic notes that punched their way through the auditorium.   Douglas and Irabagon each traded solos, which portrayed improvisational mastery. The artful interchanges were contained within a steady frame of Linda Oh’s prolific bass lines.

The performance throughout the evening embodied a quintet that played with an abundance of energy. Refusing to leave a single note on the table. If John Coltrane were alive to see this band, he would surely have picked up his sax to join in. In the tradition of Coltrane and Ornette Coleman, the band made ample use of their crafts to literally squeeze out every breath of every note possible. As with Coltrane and Coleman, you felt the sense the quintet members were exploring the depth of every note floating in a galaxy of a musical universe. 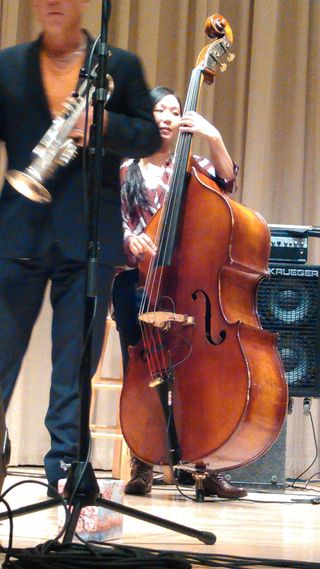 The quintet performed music from its latest project entitled Brazen Heart. Douglas referred to the CD as a project reflecting the struggles we are going through in today’s world. Yet, a world filled with the bravery of human love in the face of tragedy. This emotional tone can be heard and felt throughout each of the musician’s soloing.

The tunes performed ranged from those straddling the boundaries of free jazz to those incorporating an undertone of old spiritual and gospel music. These tunes offered a musical thread that connects contemporary jazz with that of preservation-style New Orleans jazz.   Matt Mitchell transformed the Steinway piano into a moving mosaic of art through several ballads. While, Linda Oh gave us the hypnotic heartbeat of the music performed. Rudy Royston shined in bringing rapid rhythmic power but ever so soft and with subtlety. Truly masterful balance was displayed.

In the end, the audience was moved by a very rousing performance.  Cheers and a standing ovation well deserved.  The concert put on by this magnificent quintet was nothing short of brazen and filled with heart.

(The Art Of Jazz Series is produced by Jon Nelson and presented by the Albright-Knox Art Gallery with the generous support of Hunt Real Estate.  The next performance in the series is scheduled for January 31, 2016, and will feature the Yosvany Terry Quintet.  The Cuban saxophonist, percussionist, and composer makes a rare appearance.  Special thanks to William Walsh for the photos.)