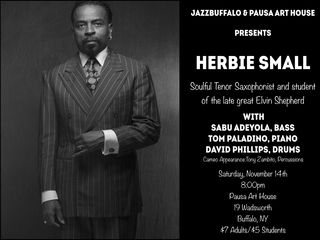 Small, the artist, singer, and tenor saxophonist has a special connection to one of the greats depicted. The legendary tenor sax giant Elvin Shepherd and Herbie Small formed a special bond as teacher and student. One of the several students Shepherd had, including Grover Washington, Jr., Shepherd passed on to Small how to captivate an audience by eliciting a mellow sound from the tenor sax. 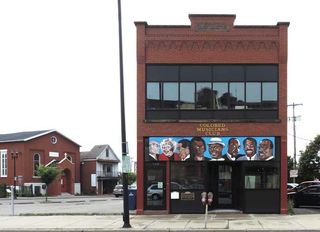 Small has developed his own distinctive soulful warm sound since in the tradition of legendary tenor saxophonists who have taken the jazz stage the past few decades. Herbie Small has played with many who have come through the Historic Colored Musicians Club and throughout the region. Including playing with the revered Al Tinney.

On Saturday, November 14th, JazzBuffalo and Pausa Art House partner together to present Herbie Small in an intimate setting. Joining Small will be bassist Wayne Moose with Tom Paladino on piano and David Phillips on drums. The concert begins at 8 pm with an entrance cover of $7 adults / $5 students.

If you have not heard Herbie Small, this is your chance to hear one of the notable tenor saxophonists in the area.