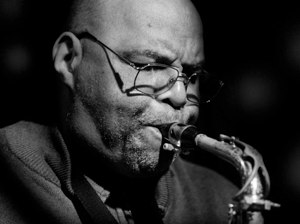 One of the most traveled and revered saxophonists to come out of Buffalo is Joe Ford. Ford makes a return visit to Buffalo this week and will perform in three separate settings between Thursday and Friday.   The former Buffalo teacher, in his early days, has a long history in pushing the boundaries of styles and jazz playing as a leader, as well as, a sideman with many of the most notable jazz artists of our time.

Joe Ford began playing music at the age of seven. After graduating from Central State University with a degree in music, he returned to Buffalo and landed a job teaching in the Buffalo Public School System. He played locally, including with the famed Buffalo Jazz Ensemble, until he received a momentous invitation to join the McCoy Tyner Quartet.

As the saying goes, the rest is history. An illustrious history it has been.   Ford has appeared on over 80 albums and soundtracks, including albums by McCoy Tyner, Freddy Cole, Malachi Thompson, Frank Foster, Avery Sharpe, and many more. Winning a Grammy Award with the McCoy Tyner Big Band.

Here is Joe Ford with Nasar Abadey and SUPER NOVA: 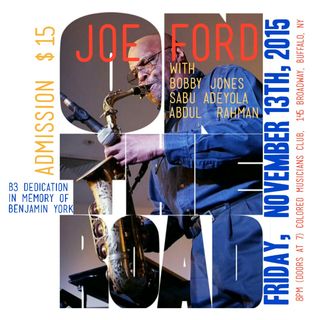 You will find Joe Ford this week at these three appearances:

At Pausa Art House on Thursday, November 12th at 8 pm with the Buffalo Jazz Octet

At Villa Maria College at 11:00 am for the M&T Noon Series

At the Historic Colored Musicians Club at 8pm with Bobby Jones, Darryl Washington, and Sabu Adeyola (there will also be a B3 Hammond Organ dedication for Ben York)

Three chances to catch one of the greats to have come out of Buffalo!