As Christmas approaches us, we find jazz in the midst of holiday events and spirits in the Greater Buffalo area.  The upcoming week will provide several opportunities to enjoy a jazzy Christmas time.

Guaraldi Christmas In The City

A Guaraldi Christmas in the City event takes place at Shea’s Smith Theatre on Thursday, December 17th at 7 pm.  The description: A tribute to the Christmas music of Vince Guaraldi. Grüvology performs the album in its entirety, and a children's choir sings under the direction of Linda Appleby. Anthony Re will open the entertainment with a wonderful set of great jazz standards. Tickets are $22.  Looks like just the right mix of Christmas and jazz!

This unique duo of Vincent and Carina Mastrantonio, along with drummer John Brady, bring their special blend of jazz noir music to Pausa Art House on Friday, December 18th at 8 pm ($7).   Here’s a description: A spicy blend of jazz, surf tango, and pop, with a touch of blood and a dash of cinnamon—feast your ears on Carina and The Six String Preacher’s latest EP “Why You So Wild, Crocodile?” This long-awaited second album features five original tracks, including YouTube singles “Cabin Fever” and “Forget About Me”.  Check out their latest video: 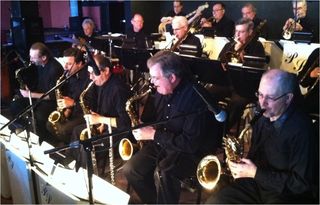 This big band is about as big as they come in the Buffalo area.  They will be playing at the Sportsmen Tavern Monday, December 21st beginning at 7 pm.  It will be their final performance of the year. The band features Heather Holden, vocals; Sal Andolina, Ron Paladino, Kelly Bucheger, Craig Incontro, Harry Fackelman, saxophones; Dennis Tribuzzi, Jim Bohm, Nelson Starr, Mark Filsinger, trumpets; Phil Sims, Stu Easter, Alan Jaenecke, Lon Gormley, trombones; Mike Moser, guitar, Tom Paladino, piano, Jack Kulp, bass, and Dan Hull, drums.  Certainly quite the line-up.  Here is a description by Phil Sims, who leads the group: The Buffalo Brass has been in Buffalo since 1985 playing original and classic big band music. Last year's "Best Big Band In Buffalo" vote of confidence in the JazzBuffalo Readers and Fan Poll was awesome and appreciated. Come out to Sportsman's (tickets available at the door $10) and hear an incredible, swinging big band. It's our last show for quite some time, so we hope to see you there! 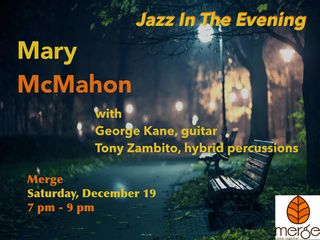 On Saturday, December 19th from 7 pm to 9 pm at Merge catch jazz vocalist Mary McMahon with George Kane on guitar and Tony Zambito on hybrid percussions.

On Sunday, December 20th at 6 pm at the Colored Musicians Club, see Jazz Wiz with Robert Merlin Davos on piano, Sabu Adeyola on bass, and David Phillips on drums as part of the first hour of the CMC jazz jam.

On Saturday, December 19th see The Fredtown Stompers from 10 pm to 2pm at Hot Mamas Canteen

See the Jazz Example at the Anchor Bar at their standing gigs every Friday beginning at 8 pm.

A reminder that the Joe Baudo Big Band performs every Tuesday at the Sportsmen Tavern from 12pm to 2pm. 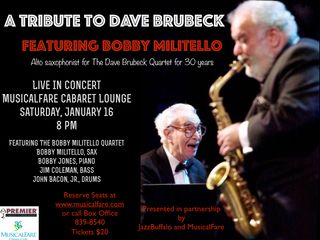 A JazzBuffalo and MusicalFare Theatre partnered events takes place on Saturday, January 16th in the Cabaret Lounge.  A Tribute To Dave Brubeck will feature Bobby Militello and his quartet of Bobby Jones, Jim Colemon, and John Bacon, Jr.  Go to the MusicalFare website here to order tickets online or call the box office at 716-839-8540.   Do so soon as tickets for this one night only performance are selling fast.