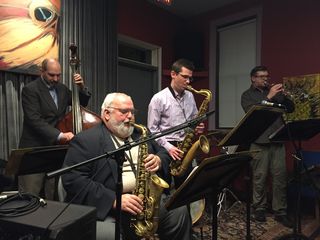 When you have friends who can drive down the I-90 from Rochester, special things can happen musically.  Last night was such a happening at Pausa Art House.  The George Caldwell led group Star People, a band exploring the vast influential music of Miles Davis, put on a memorable performance.  Sure to be one up for the most memorable performance in next year’s JazzBuffalo Poll.

From the opening familiar tune of Milestones, you got the sense the band was brewing a special mix of chemistry.  Seeing the expression on the faces of the musicians, you also knew they felt that magical brewing as well.  The band consisted of George Caldwell on piano, Bobby Militello on alto sax, Tim Clarke on trumpet, Doug Stone on tenor sax, Jeff Campbell on bass, and Sean Jefferson on drums.  Stone, Campbell, and Jefferson came into town from Rochester with each having impressive jazz artistry resumes.  Doug Stone, on the tune Milestones, got the show underway with an energetic performance on tenor.

A highlight of the performance included a searing rendition of Wayne Shorter’s Ana Maria.  A tune, George Caldwell explained, Shorter wrote for his wife in 1974 but became more poignant after she was tragically killed in a plane crash in 1996.  Militello’s gentleness on the soprano sax echoed both the beauty and sadness Shorter must have felt in performing this tune.  Caldwell was magnificently masterful on the song in giving us beautiful prose.  Jeff Campbell, on bass, in this song and throughout the night excelled in evoking the subtle beauty of the Miles sound.

Other highlights included Tim Clarke’s muted trumpet performance of Miles Davis’s Flamenco Sketches.  Reviving the mesmerizing muted Miles sound, it captivated the audience endearingly.  The blend of power and rhythmic technique by drummer Sean Jefferson was evident on the Tony William’s tune Creatures of Neptune.  Jefferson displayed the driving force of Tony Williams, which propels songs truly to another planet.

Here is a small clip of Tim Clarke on Flamenco Sketches – a beautiful performance it was:

The band ended the night with another classic Miles Davis tune, Seven Steps To Heaven.  Bookending the concert with the familiar Miles sound, magnificently arranged by George Caldwell, that takes days to leave your head.  This exclusive band and tribute to Miles Davis at Pausa Art House is a gift to the many Miles Davis fans here in Buffalo.  A gift that keeps on giving.