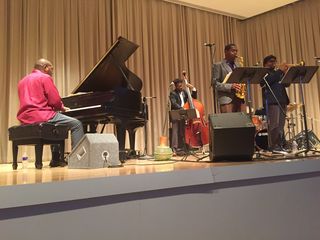 For Yosvany Terry and his quintet, it is quite possible they have to confront a labeling issue often.  That is, when concert promoters and reviewers bring up his being born in Cuba, it is bound to conjure up images of very Cuban folkloric infused jazz.  Or, the quintet can be referred to as the latest and hottest Latin Jazz band.   Lumped into the category of the ever growing Latin Jazz community.  Replete with images of band configurations resembling those of Poncho Sanchez and other Latin Jazz stars.

To do so would not do this quintet justice.  It simplifies the intricate and beautiful expressive music they perform.

If you attended the Art of Jazz Yosvany Terry Quintet concert at the Albright-Knox Art Gallery on Sunday, January 31st, you may have walked in expecting to hear “hot Latin Jazz” and perhaps wore your best dance shoes to tap along.  However, the audience was treated to a level of musicianship excellence hard to duplicate.  Undoubtedly, walking out of the concert forever more enlightened on the significant artistry Yosvany Terry represents in the jazz music community.  And, glad to have shredded the label of “hot Latin Jazz” for this special concert.

I believe this is a guided intention by the artistic director of the Art of Jazz Series, Jon Nelson.  To expand the horizon of the jazz consciousness of Greater Buffalo.

From the opening number of Cooking in Retrospect, the band did indeed cook.  The ingredients were an interlacing of free expressive jazz blended with a dose of straight-ahead jazz and a dash of Afro-Cuban rhythm.  Grabbing the attention of the audience and perhaps for some – producing a “this is different” moment.  The quintet consisted of Yosvany Terry on alto sax, Osmany Paredes on piano, Michael Rodriguez on trumpet, Yunior Terry on bass, and Ludwig Afonso on drums.

On the tune Contrapuntistico, the excelling musicianship of the band became readily apparent. Pianist Osmany Paredes opened with dynamic lyrical styling and kept the audience in wonder throughout the entire concert.  Setting the stage for Yosvany Terry on alto sax and Michael Rodriguez to give us both melodic introductions and blended harmonies that were complex yet embraceable.  Keep an eye on Michael Rodriguez who displayed trumpet chops that are sure to be increasingly noticed in the jazz world.  Michael has also formed a hot new Latin Jazz Band with his brother Robert called the Rodriguez Brothers.  In this case, the “hot Latin Jazz” label is very apt.  Here is Contrapuntistico as it is performed on the Today's Opinion CD, in which Osmany Paredes magical musicianship on piano shines:

A driving force in the quintet is that of bassist Yunior Terry, an energetic improvisational performer and also Yosvany’s brother.  His rhythmic bass lines served as an anchor for the music and allowed for the horns and piano to freely expand.  Yunior’s composition, Suzanne, was one of the highlights of the concert.  It introduced an underlying samba groove that locked in Yunior’s bass lines with drummer’s Ludwig Afonso’s melodic style of playing drums.  Here’s the tune as it is performed on the Today’s Opinion CD:

Two other songs, El Buvlon and The Crying, put Yosvany Terry’s master musicianship of the alto saxophone on display.  With range, speed, and control, Yosvany produced creative expressions of notes that filled the room with awe-inspiring clarity.  There is no wonder why he is being noticed in the entire jazz world and not just in the Latin Jazz community.  His compositions and arrangements are innovative and refreshing.  Pushing the boundaries of conventional thinking for Cuban-born artists and defying the labels, which can often follow them around like a dark cloud that will not go away.

To end the concert, Yosvany took the audience back to the roots of his Cuban influence and familial heritage.  Coming from the family of one of the world’s renowned Cuban violinist and shekere masters, Terry’s father – Eladio “Don Pancho” Terry Gonzales.   The song, Summer Relief, began with folkloric vocal chants by Yosvany Terry that segued into a masterful solo performance on the shekere.  Astonishing it was.

When the band did join in on Summer Relief, it came full circle to the Afro-Cuban or Latin Jazz sounds perhaps many may have expected to hear when arriving.  In this case and in the end, it was well worth the wait.  Because you received that in this song but received so much more in the entirety of not only this song, but also that of the entire concert.

Here is the tune Summer Relief as performed on the Today’s Opinion CD and a perfect lasting impression: