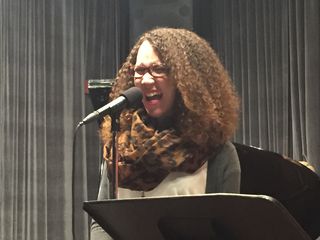 When someone starts singing Stolen Moments right from the start, it gets my attention right away.  There are certainly legions of fans here in Greater Buffalo who will forever have Mark Murphy’s version tucked away in the recesses of their memories.  Perhaps even recalling seeing him perform this song at the old St. George’s Table many years ago.

For a young nineteen years old vocalist making her debut at Pausa Art House, choosing this song, with jazz vocal scatting included, was an impressive start.  Alexander McArthur is a dual major in music and theatre at UB who has been studying the craft of jazz vocalese.  And, it showed last night.

Here is a brief clip of Alexander on Stolen Moments stretching out on jazz vocalese:

As for all singers and musicians making debuts, it may take a few songs to unlock the unconscious feelings and zone of performing.  McArthur followed Stolen Moments with a bluesy version of Willow Weep For Me.  Then segued into a swinging rendition of Fly Me To The Moon. Support from the band of George Caldwell on piano, Dave Schiavone on sax, Jon Lehning on sax, Anthony Henry on bass, and Alec Dube on drums was augmented by spectacular solos.

In this setting, the dual saxes at times made it difficult to hear McArthur and the nuances related to intonations and phrasings of songs.  But, no question they can entertain!  Each gave us superlative performances and Schiavone displayed remarkable versatility with alto sax, tenor sax, flute, and soprano sax.

Alexander came out to start the second set with the Gregory Porter song, Water Under Bridges.  Accompanied only by George Caldwell on piano, it was a searing rendition.  Giving the audience a sense of the raw power and talent she possesses.  After a grooving version of Girl From Ipanema with neat timing from Alec Dube and a creatively arranged ending by Jon Lehning, the key unlocking emotions seemed to be fully turned.  On the Nancy Wilson song, Save Your Love For Me, McArthur poured it out.  Giving us all a glimpse of a potential when this key gets thrown away for good someday.  Displaying a maturity of feelings that seemed to surprise McArthur herself.

Here she is briefly on Water Under Bridges:

The concert ended with an up-tempo version of Summertime, where Alexander put fun vocalese into this version and Dube performed an attention-getting solo.  In the end, though, it was an impressive beginning for a young performer.  A beginning, which gives us all something to look forward to as McArthur continues to evolve and reach her potential as one of Buffalo’s finest jazz vocalists.

One thought on “JazzBuffalo Review: An Impressive Start For A Young Jazz Singer”