It may be frigid but the warmth of jazz can be found throughout Greater Buffalo in the next week.  Bundle up and see what are sure to be great performances. 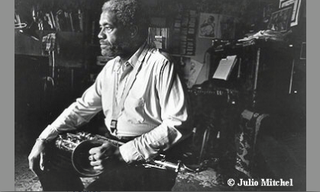 Happening at Pausa on Thursday, February 11th at 8 pm is Why Not? Plays The Music Of Clifford Jordan.  The band  of Why Not? Will include leader Kevin Doyle on piano, Tim Clarke on trumpet, Brian DeJesus on bass, David Phillips on drums, and Alexandra McArthur on vocals as they present the edgy improvisational music of the tenor saxophonist Clifford Jordan, best known for his time with Charles Mingus and his classic “Glass Beads Games” album. On Friday, February 12th at 8 pm at Pausa Art House, check out Carina and the Six String Preacher.  This jazz noir band will feature Carina Mastrantonio on vocals and Vincent Mastrantonio on guitar with guest David Phillips on drums.  They will be playing new music from their Why You So Wild, Crocodile? CD, as well as, some of their favorites from their Liquid Think CD. 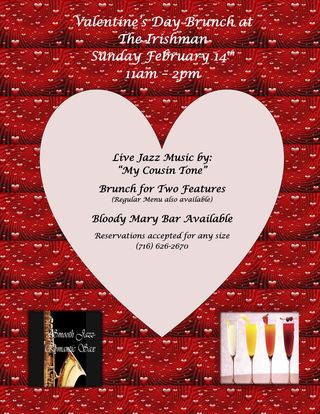 On Valentines Day, you can catch My Cousin Tone’ at the Irishman Tavern in Williamsville for the brunch hours between 11 am and 2 pm.  The band will feature Karen Ragusa on bass, Nelson Starr on trumpet, Tim Martin on sax, Pete Dauphin on trombone, Jim Matteliano on keyboards, and Bill Basil on drums. 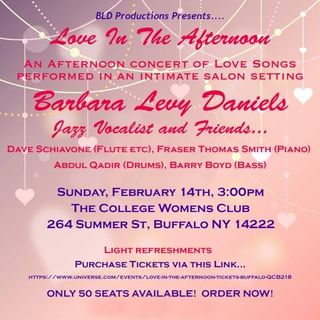 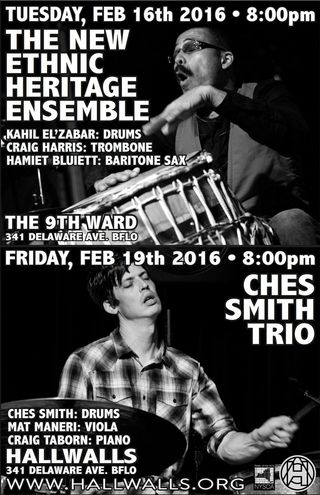 The New Ethnic Heritage Ensemble featuring Hamiet Bluiett (baritone saxophone/clarinet), Craig Harris (trombone/didjeridu), and Kahil El'Zabar (drums/percussion/voice) will be performing at Hallwalls on Tuesday, February 16th at 8 pm.  Here is the write up from Hallwalls:

The Ches Smith Trio will perform at Hallwalls on Friday, February 19th at 8 pm and feature Ches Smith (drums, percussion), Mat Maneri (viola), and Craig Taborn (piano).  Here is the write up:

This is a brand new trio composed of three notable musicians from New York: Ches Smith on drums and percussion, Craig Taborn on piano and Mat Maneri on viola. An early, all‐improvised gig proved the trio to possess a strong and distinct musical chemistry. Smith realized this had to be his new band in spite the daunting task of finding time to rehearse and play in his dense schedule, and those of Taborn and Maneri.

Smith composed a book of music that draws on the chemistry of the group, including through-composed material as well as pieces designed to be interpreted in open-ended ways where the material is funneled through the particular—and often peculiar—improvisational process of this ensemble.

On Friday, February 12th beginning at 5:30 pm to 8 pm you can see the Herbie Small Quartet at the Burchfield Penney Museum.  The quartet will feature Herbie Small on sax, Barry Boyd on bass, Les Davis on piano, and Abdul-Rahman Qadir on drums.

On Friday, February 12th at Nietzsche’s you will find four bands performing jazz, soul, funk, and Dixieland with Adam Bronstein's Freehand Band, Blue Rootz, Fredtown Stompers, and Blue Stone Groove.   For you late birds, the festivities get underway at 10 pm.

On Saturday, February 13th at 8 pm at 42 North Brewing Company in East Aurora you can catch the Hot Club of Buffalo

This weekend, Friday through Sunday, Joe Baudo and Cheryl Ferris will be at Cugino's in Williamsville nightly from 6:30 pm to 9:30 pm (6 pm to 9 pm on Valentine's Day) 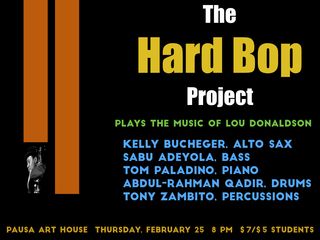