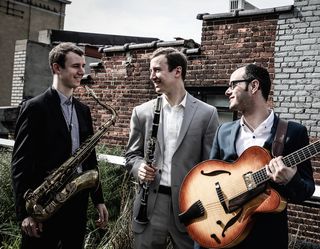 In May of 2015 at the MusicalFare Theatre Cabaret Lounge, the Greater Buffalo area was treated to one of the most memorable jazz concerts of the year.  In that month, the Pete and Will Anderson Trio made a stop in Buffalo while on a multi-city tour that took them from the East Coast to the West Coast.  Performing their unique brand of duo saxophones and clarinets augmented by superlative guitarist Alex Wintz.

If you missed it then, you will not want to miss it this coming May, when on Sunday, May 22nd at 7 pm the twin brothers and guitarist make a return visit to the Cabaret Lounge at MusicalFare Theatre.  JazzBuffalo and MusicalFare Theatre partner once again to bring you the acclaimed Pete and Will Anderson Trio direct from New York City.

The use of the word “acclaimed” just may not be enough for these talented brothers.  Both have attended the famed Julliard School of Music in New York City.  As youngsters from Washington, D.C., they were selected internationally for the Betty Carter’s Jazz Ahead, the Next Generation Jazz Orchestra, and NFAA Young Arts Program.

Since residing in New York City, they have performed in over 30 U.S. States, toured Japan, and have been featured four times in NYC’s famed “Highlights in Jazz” series, alongside legends Lou Donaldson, Paquito D’Rivera, and Wycliffe Gordon.  Certainly in good company!

Additionally, Pete and Will Anderson have been featured headliners at The Blue Note, Jazz at Lincoln Center, The Kennedy Center, New Orleans Jazz Festival, Sarasota Florida Jazz Festival, South Carolina’s Jazz Corner, Seattle’s Triple Door, Miami-Dade’s Cultural Arts Center, and The Arizona Music Festival.  Most recently, they were headliners for the special tribute called Moonglow: The Magic of Benny Goodman, which was held at the Jazz at the Lincoln Center.

Their recordings have also garnered recognition.  The brothers are featured on JAZZIZ Magazine’s Winter 2014 CD Soundtrack.  Their recent release, Reed Reflections, was called by the Washington Post, “imaginatively unfolding in ways that consistently bring a fresh perspective to classic jazz tunes.”  Their newest album, Deja Vu, features Albert “Tootie” Heath and was called “a burner that reveals the band’s cohesiveness and spirit” by Mike Joyce in JazzTimes.

Here is a promotional video that will help introduce Pete and Will Anderson to you:

This is a rare opportunity to see and hear top jazz talent and artistry of the likes you will experience only in New York City.  Do not miss it! 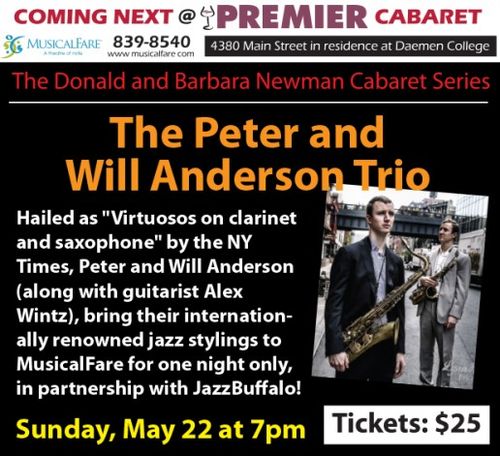