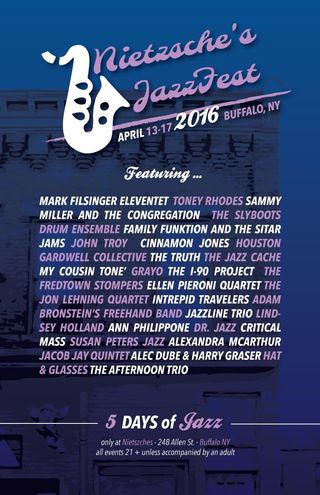 One thing we can say about the rising stars generation of jazz artists is their enterprising spirit creates more opportunities to hear and experience jazz.  One such rising star is Ellen Pieroni.  A senior in the music program at Buffalo State College, as well as, a member of several jazz bands and other mixed varieties of genres.  Including the Ellen Pieroni Quartet.

Working on behalf of Nietzsche’s as a booking manager, Ellen has been instrumental in pulling together the first-ever Nietzsche’s Jazz Fest.  It will feature many of the jazz youths in the region mixed in with some of the veteran jazz performers.  The festival takes place from Wednesday, April 13 to Sunday, April 17.  Wednesday through Friday will start out by featuring jazz bands for Happy Hour; to be followed by line-ups that go into the early morning with the last band going on at 1 am.  Happy Hour will be from 6 pm until 8 or 9 pm and will be free.  Admission to the line-ups beyond Happy Hour will have a nominal admission of $5 to $10.

Here is the line-up of the days, times, and bands: 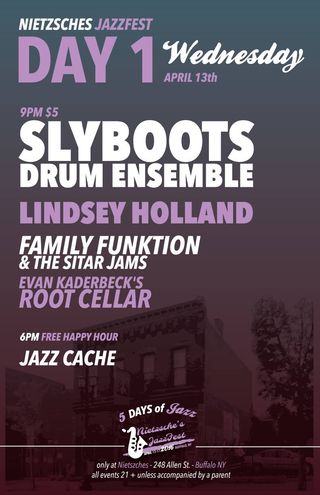 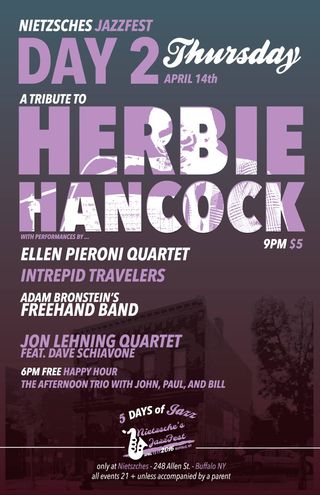 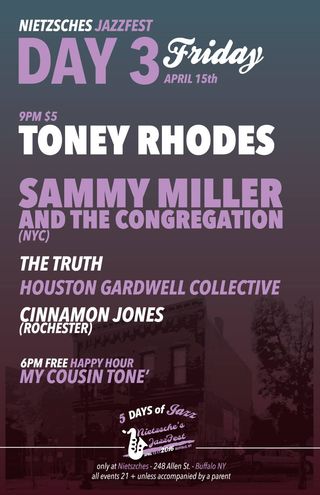 1am: Sammy Miller and the Congregation 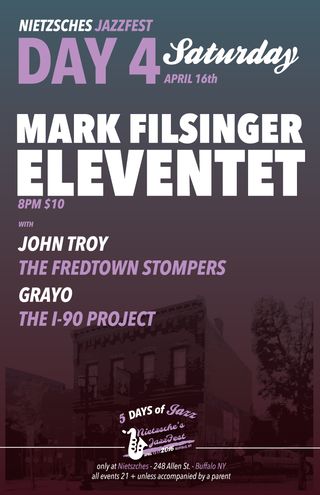 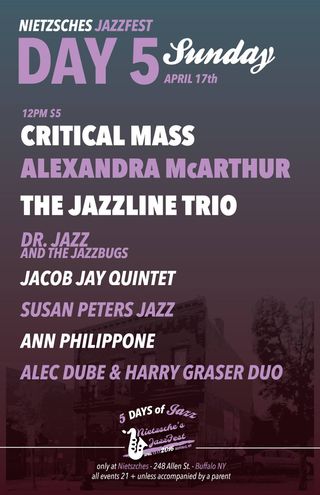 For those who welcome the voluminous amount of detail regarding performers, I have included what was provided by the organizers, for your reference, following the end of this post.

This is most definitely an ambitious five days of jazz and jazz mixed music.   Something for everyone.  The organizers of the festival released this statement:

“With the diversity of participants and performers coming together to celebrate the spirit, culture, and tradition of jazz in this intimate setting, anyone who’s said “jazz is dead” is surely just not paying enough attention.”

I could not agree more. If you have been missing the reemergence of a strong culture of jazz rising in Buffalo, you just may not be paying attention indeed.

As promised, what follows is a more detailed description of the daily events as provided by the organizers:

The festival kicks off Wednesday night with a free happy hour show at 6pm, which also will occur Thursday and Friday nights before the billed performances start at 8pm.  Wednesday night covers a mixture of world music and classic jazz, with acts such as The Slyboots Drum Ensemble, and Family FUNKtion and the Sitar Jams exploring the spirit of jazz from other cultural reference points, while Root Cellar and young songstress Lindsey Holland and her band showcase songs with a classic jazz approach and beyond. Music goes until midnight and is only $5 at the door.

Thursday night is sure to be one of many highlights of the festival, featuring performances of only original compositions by Herbie Hancock as a tribute to the jazz legend. Though taking place in the middle of the first ever Nietzsche’s JazzFest, this event is no stranger, with this year being the second annual Herbie Hancock Tribute Night.  This year showcases the same cast of characters coming together as last year, but performing completely different sets than the previous year. The concept behind this show is that each band “drafts” tunes as part of their setlist that only they can play, ensuring no song repeats throughout the course of the night, a task not particular difficult with the density and variety of Hancock’s catalogue. The show will feature main stage performances by the Jon Leaning Sextet, Intrepid Travelers, and the Ellen Pieroni Quartet, with two up front sets from Adam Bronstein’s Freehand Band. Furthermore, each band exhibits some of the top local young jazz artists on the rise side-by-side with some local jazz heavyweights. The show starts promptly at 9pm and $5 at the door will be well worth the vast array of Hancock compositions, ranging from straight-ahead jazz, to avant-garde jazz, funk, fusion, and even hip hop.

The weekend starts off with a bang Friday night, with two of the festival’s headliners performing main stage sets in the same night.  Toney Rhodes, a well-established keyboardist hailing from Buffalo, hits Nietzsche’s at 11pm and plays until midnight with a 10-piece band of local all-stars, playing original music that reflects a flavor of jazz, rhythm and blues, and funk. Rhodes displays a strong foundation in the tradition of gospel, and has worked extensively with artists such as Grammy nominated saxophonist Najee, as well as Joe Wooten of the Steve Miller Band and the Wooten Brothers Band. Rhodes holds the Buffalo region close to his heart, reflected by the title of his debut CD (“The Buffalo Spell”), and his underlying inspiration for making music in his own words: “…to zero in on the sound that has made the region of WNY stand out in the industry throughout the years.”

Also featured Friday night is headliner Sammy Miller and the Congregation, who you can catch keeping the fire lit from 1am until at least 2. Sammy Miller, a Los Angeles native, is a drummer, singer, and bandleader whose list of accomplishments include recording/performing with names such as Wynton Marsalis, O.A.R., and Lee Fields at esteemed venues such as The White House, Lincoln Center, and the Hollywood Bowl, and totes a Master’s degree from The Juilliard School to boot. His ensemble, The Congregation, was formed in New York City and carries this simple message as their mission: “…to put the generosity back into jazz and bring art back to the people…play joyful jazz – music that feels good…that entertains, enriches, but most of all uplifts.”

These two acts will be supported Friday night by Cinnamon Jones from Rochester, NY, and local acts THE TRUTH, and Houston Gardwell Collective. Music starts at 9pm and runs deep into the night until roughly 2am for $10.

Saturday hosts another local headliner and familiar face to the Buffalo jazz scene, Mark Filsinger and his Eleventet. Mark Filsinger is a local jazz educator, composer, arranger, and trumpeter who leads the band, which consists of some of the most celebrated jazz musicians in Western New York. The ensemble aims to combine “the excitement and power of a big band with the creative improvisational aspects of a small jazz group.” The Eleventet displays a vast array of original material as well as original arrangements of well-known standards which provide plenty of space and inspiration for improvisers to amaze audiences alike. Although only formed in the spring of 2015, Filsinger’s Eleventet is already turning heads and making ears perk among jazz musicians young and old. You can catch the Eleventet starting off Saturday night right with an 8pm-10pm set on the intimate and interactive main stage of Nietzsche’s.

Saturday also hosts Dixieland Jazz group The Fredtown Stompers, as well as John Troy and his band, duo outfit Grayo, and The I-90 Project. The show starts at 8pm prompt and goes until 2am or later with a $10 door charge.

The inaugural Nietzsche’s JazzFest wraps up the weekend on Sunday with music happening all day. Music starts at 12pm and stretches until the last performance of the festival at 8pm by Dr. Jazz & the Jazzbugs. For only $5, the all day event includes performances by a wide variety of jazz music. Classic jazz, cabaret, fusion, swing, and funk will all be present as Nietzsche’s closes the books on its historical first jazz festival. Performances include The Jazzline Trio, Jacob Jay Quintet, Alec Dube & Harry Graser Duo, Alexandra McArthur, Critical Mass, and Nietzsche’s favorites such as Susan Peters, Ann Philippone, and Dr. Jazz and the Jazzbugs. For only $5, day five of the Nietzsche’s JazzFest sure packs in plenty for any jazz lover.