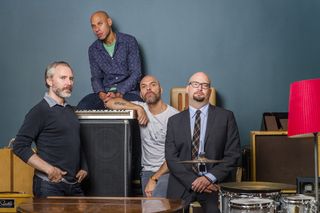 You can envision the three original members of The Bad Plus, pianist Ethan Iverson, bassist Reid Anderson, and drummer David King, being uncertain as to what would happen when they invited Joshua Redman to join in with them.  This was in 2011, where the Bad Plus was booked for a week at the famed Blue Note in New York City.  Undoubtedly, they knew something creatively special and forceful would occur.

Last night, at Buffalo State’s Rockwell Hall Performing Arts Center, we were able to witness the creative force that represents The Bad Plus with Joshua Redman.  Redman, the son of the late great free jazz artist Dewey Redman, adds a marquee presence to the group.  Adding an improvisational dimension to the already unique music of The Bad Plus.  But make no mistake, it is the resulting chemistry of the group, which makes for all of us to see that something special is going on.

Last year, this collaboration between Redman and The Bad Plus brought forth the highly acclaimed album – The Bad Plus Joshua Redman.  The album was the main source of the repertoire of the music performed.  While each song is notable, such as “As This Moment Slips Away”, their combination represents a mosaic of jazz art.  A mosaic filled with expressive moments yet connected.  Giving us a memorable definitive sound uniquely sketched into a canvas named The Bad Plus Joshua Redman. 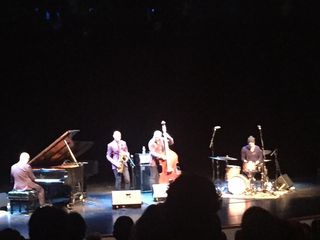 This canvas is noted from the start just in how the band lines up on stage.  Departing from the traditional staging of the rhythm section in the back and horns fronting, the band is in a clean line across the stage.  The right optics for each performer is contributing masterful artistry within each song performed.  The songs performed ranged from edgy free jazz to very rhythmic and melodic.  Each song, however, arranged and composed with a high degree of intricacy.  Where the artist is granted freedom to continue to paint this mosaic of art and sound unique to the band.

Drummer David King was a driving force for several of the songs.  His interlacing of groove funk rhythms into songs offered up a contrast to the others exploring the range of possible notes in each song.  Redman displayed masterful control and artistry throughout.  Imagine each note as being malleable.  Redman bends and reshapes sounds like few saxophonists can.

Here is a video of “As This Moment Slips Away”, which we hear David King’s powerful drumming locked in with Anderson’s bass lines, Iverson’s beauty on piano, and Redman’s artistry on saxophone:

What the band put on display is a testament that jazz is alive and expanding in the contemporary world.  Infusing sounds blending contemporary with traditional jazz.  The audience in the partially filled center was enthusiastic from the start.  I think many recognizing that this sound is truly breaking new ground and giving us a glimmer of what the future can behold.  When the performance was over, the band received a well-deserved rousing standing ovation.

No doubt the ovation was for the performance but also for the daring works of artists who leave their previous comforts to charter a new path in the world of jazz.