The 2nd Annual Sunday Jazz Series brought to you through the partnership of JazzBuffalo and 189 Public House gets underway this year on May 15th.  The first year saw memorable performances as we initiated the series at the East Aurora establishment.  Closing in December of 2015 with the unforgettable 3 Tenors Concert, which featured Phil DiRe, Dave Schiavone, and Bobby Militello on tenor saxophones.

The first year proved to be an experiment in many ways.  For example, after experimenting with several start times, we have settled on a new start time of 6 pm this year.  The series will continue to be on the Third Sunday of every month from May through December (dates may move due to holidays and notice will be provided).

We also will look to bring variety in several areas, as we did last year.   We will spotlight legends, new projects focused on jazz tributes, a representation of the young rising stars, a Rochester representation, and crossover blends of jazz, soul, and R&B.  What follows is the schedule for 2016 through October of this year: 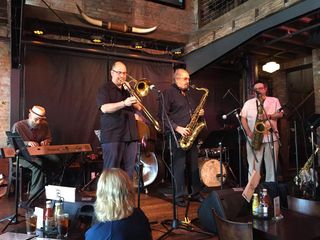 May 15th:  The legendary Phil DiRe, once again, kicks off the series with a version of saxophonist Phil DiRe and Best Friends.  You will not want to miss his friends on this date as joining Phil will be George Caldwell on keyboards, Wayne Moose on bass, John Hasselback, Jr. on trombone, Dave Schiavone on sax, and John Bacon, Jr. on drums.

June 26th: On this date (note change from 3rd Sunday due to Father’s Day) we feature The Hard Bop Project.  The band is a project focused on the music of Lou Donaldson, Gene Ammons, and other artists who introduced the highly accessible sounds of soulful hard bop.  The band features, Kelly Bucheger on saxophone, Tommy Paladino on keyboards, Sabu Adeyola on bass, Abdul-Rahman Qadir on drums, Tony Zambito on percussion, and special guest Tim Clarke on trumpet. 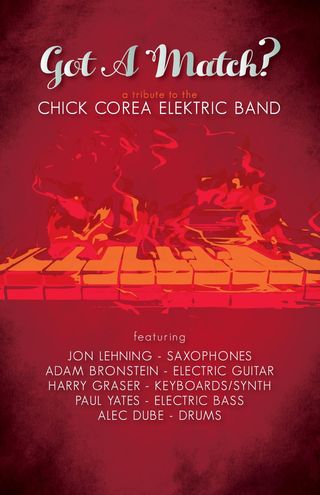 July 17th: In July, we introduce one of the rising stars of jazz in band leader Jon Lehning and the members joining him on stage.  The band is called Got A Match?.   A tribute effort to the music of the Chick Corea Elektric Band.  Look for a rising stars’ line-up to feature Jon Lehning on saxophone, Adam Bronstein on guitar. Harry Graser on keyboard/synth, Paul Yates on bass, and Alec Dube on drums. 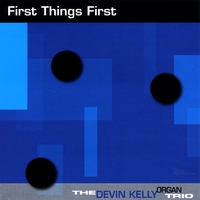 August 21st: In this month, we bring Rochester and beyond to the area.  We will introduce the Devin Kelly Trio.  A throwback to the sounds of organ-styled jazz.  The band will feature the highly touted Eastman Music School professor Bob Sneider on guitar, Dino Losito on keyboards/organ, and Devin Kelly on drums.  Each has shared the stage with such jazz luminaries as Clark Terry, Lou Donaldson, Chuck Mangione, Huston Persons, and Nancy Kelly.  Their CD, First Things First, is well worth the listen. 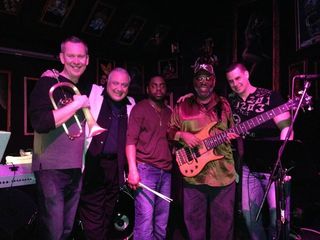 September 18th: The jazz-crossover band featured this year will be Winelight.  The band consists of Jim Bohm on trumpet/flugelhorn, Dave Calire on keyboards/vocals, Jerry Livingston on bass, Ken Whitman on saxophone, and Carl Johnson on drums.  With the former Rick James and Stephanie Mills electric bassist Jerry Livingston driving a groove, look for music that honors the musical sounds created by the likes of the famous Grover Washington, Jr. album –Winelight. 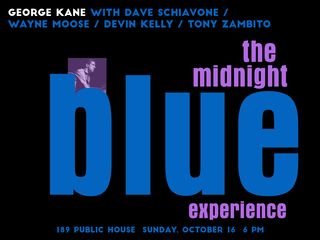 October 16th:  In this autumn month, we bring to the stage The Midnight Blue Experience.  This jazz tribute project is focused on the music of Kenny Burrell, one of the greatest guitarists to have performed jazz.  The band is named after Kenny Burrell’s legendary album, Midnight Blue.  The band will feature George Kane on guitar, Dave Schiavone on sax, Wayne Moose on bass, Devin Kelly on drums, and Tony Zambito on percussion.

November and December are yet to be determined but you can be assured of making plans to see and hear jazz talent you will not want to miss.

The series offers an opportunity to see some of the best jazz talents in the region.  The new start time will also accommodate those who will wish to enjoy the fine foods, drinks, and liquors the 189 Public House has become noted for since their opening a few short years ago.

We look forward to bringing to the fans of jazz performances that entertains and introduces new jazz artists as well.  Mark your calendars for what will surely be memorable performances taking place at 189 Public House in 2016.