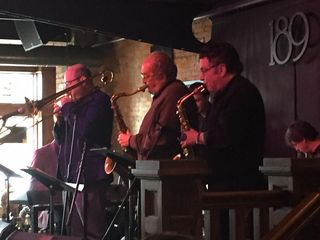 On Sunday, May 15th we saw the kick off of the JazzBuffalo / 189 Public House Sunday Jazz Series.  Phil DiRe and Friends put on a magnificent performance before a packed house of appreciative fans.  Phil’s friends included George Caldwell on piano, Wayne Moose on bass, John Bacon, Jr. on drums, John Hasselback, Jr. on trombone, Dave Schiavone on sax, and Phil DiRe anchoring the band down on tenor sax.

One of the highlights of the evening was the performance of DiRe’s original composition, Night Time.  A Latin-tinged composition that produced some very spirited solos from Dave Schiavone, Wayne Moose, and John Bacon.  We were also treated to a family affair with John Hasselback, Sr. celebrating a birthday sitting in on piano / vocals and the Hasselback family of Lisa Hasselback on piano, John Jr. on trombone, and John the third jumping in on trumpet.  What a family treat it was!

A spectacular kick-off to what promises to be an entertaining second year of the series. 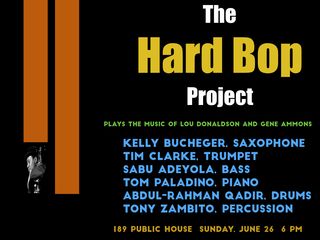 Next up is The Hard Bop Project.  A collaborative effort with saxophonist and composer Kelly Bucheger to focus on the music of Lou Donaldson and Gene Ammons.  The band will consist of Kelly on sax, Tom Palladino on keyboards, Sabu Adeyola on bass, Abdul-Rahman Qadir on drums, Tony Zambito on percussion, and special guest Tim Clarke on trumpet.  If you are a big fan of the sounds of Lou Donaldson Blues Walk and that of Gene Ammons, known as the Boss Tenor, you will not want to miss this!

Mark Sunday, June 26 at 6 pm at the 189 Public House on your calendar for the next JazzBuffalo / 189 Public House Sunday Jazz Series event.  It promises to be another superlative evening of super people, foods, drinks, and of course – jazz!