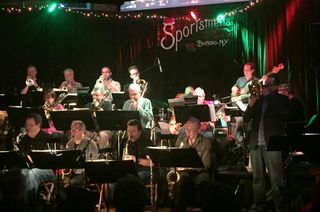 To last a while at anything, it takes a core purpose and a willingness to evolve.  Something you can say about the long lasting Buffalo Brass Big Band.  Since its origins in 1985, it has remained true to its purpose of being a hard swinging band in the concert style of the big bands of Stan Kenton and Rob McConnell.  Progressive new compositions and improvisational arrangements of jazz classics have characterized the driving force of the big band.

Kicking off the show on Monday, June 13th will be the new version of Buffalo Brass Big Band, which includes:

According to Phil Sims, leader and arranger for the band, the band has been focused on:

“The main focus of the band is on original compositions and original arrangements of great classics. Our 1988 recording ("It's Time" Mark Records) features six originals, and original arrangements of "A Train", a hard-swinging version of "I'm Getting Sentimental Over You", "I Got It Bad", and "My Favorite Things". I've been writing for the band since 1985, and we continue to add new material all the time.”

The band originally came together in 1985 as a means for several road musicians who had moved back to Buffalo to continue their passion for playing big band charts.  They came from such big bands as the Woody Herman Big Band, The Tommy Dorsey Orchestra, and Maynard Ferguson Big Band.  The original 16-piece band formed with just a base rhythm section of piano, upright bass, and drums.  Yet, giving it the versatility to play hard-swinging arrangements or concert style performances.  It was also a time where there were more opportunities for big bands to perform in the WNY area.  Here is how Phil Sims describe what it was like when the band first originated:

“At that time, there were dozens of venues for the band to gig in, including places like Mulligans, the Hyatt Atrium, Mickey Rats, Joe Rico's Milestone, the Tralf, and many more. It was a great time to have a big band out gigging. Rob McConnell was real busy right across the lake, too, so it was an awesome time for big band jazz in the region.” 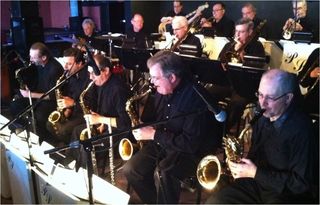 Over the years, the band began to evolve and expand its’ repertoire to keep up with modern influences.  Arranging and performing contemporary styles of funk, hip-hop, and Latin with the swinging style of the big band.  This direction was enabled by the addition of a guitar and switching from upright bass to electric bass.  Recently, the band added vocalist Heather Holden to its’ variety of music.  Holden’s focus is on the Great American Songbook with Phil Sims providing unique and original arrangements of the jazz standards that embody the American Songbook.

The longevity of the band is a testament to the amount of talent that exists here in WNY.  As the personnel of the band has changed over the years, the “chairs” of the band continued to be filled by some of the best musicians the area has produced.

Phil Sims recently relocated to Boston, which makes the future of the band a bit more tenuous than usual for any band.  However, Sims plans to return from time to time with new compositions and materials.  Pulling together the original and the new versions of the big band for concert performances.  And, perhaps record more music as well.