The start of the summer season has officially kicked off.  And, at this time of year, jazz swings into summer indoors and outdoors.  It is bound to be a summer where jazz fills the air! 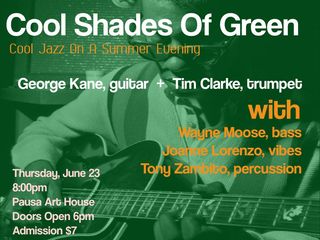 Cool Shades of Green is a night to remember the laid-back musicality of jazz guitarist Grant Green. Green possessed a recognizable Blue Note sound with a cool jazz reading of standards and ballads that were unique among his peers.  The arrangements vary from bluesy to Latin-tinge and were characterized by a unique cool jazz vibe.  Performing are George Kane on guitar, Tim Clarke on trumpet/cornet, Wayne Moose on bass, Joanne Lorenzo on vibes, and Tony Zambito on percussion for a night of cool jazz on a summer evening! 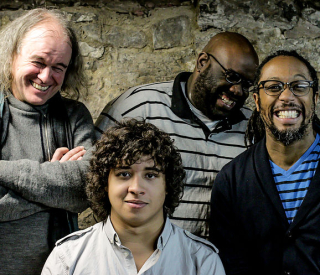 Since their European Tour last year, Gruvology has been busy rearranging material and work on new compositions.  On Saturday, June 25th, the band gets together to debut and try out new material on an awaiting audience.  See Walter Kemp, III on piano, Bernard Kunz on guitar, James Bender on bass, and David “Teaspoon” Hulett on drums.

The JazzBuffalo / 189 Sunday Jazz Series resumes this Sunday, June 26 with its second performance of the year.  Up next is The Hard Bop Project.  The project devoted to the bluesy jazz music of Lou Donaldson and other hard-bop jazz artists, who pioneered the Blues Walk and Blue Note sound.  On the 189 stage will be Kelly Bucheger on alto sax, Tommy Paladino on keyboards, Sabu Adeyola on bass, Abdul-Rahman Qadir on drums, and Tony Zambito on percussion.  If you miss the band’s debut performance in April, you won’t want to miss it again!

This musical quartet from Buffalo has been sharing their sound of improvisational blending of jazz, pop, rock, and soul throughout upstate New York and out of state as well.  The evening will include performances by the bands New Daze and the Frontstreet Men.  Here is a taste from their recent album release: 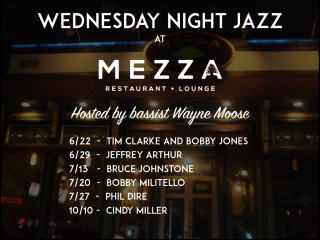 For Wednesday Night Jazz at Mezza, hosted by bassist Wayne Moose, on June 22nd at 6:30 pm see Tim Clarke and Bobby Jones.  Here is what the schedule looks like so far.

On Wednesday, June 22nd at 7 pm you can see vocalist Mike Costley, who is town from the West Coast, at GiGi’s

On Friday, June 24th at Wegman’s (Sheridan and Evans) you can catch My Cousin Tone’ beginning at 6 pm in the upper level.

On Saturday, June 25th at Hot Mama’s Canteen beginning at 1 pm you can see Alex McArthur for Beats and Brunch followed by Andrew Nixon at 5 pm.

On Saturday, June 25th at 7 pm at Merge catch vocalist Mary McMahon with Rick Strauss on guitar, Bud Fadale on bass, and Tony Zambito on percussion

Trumpet player, Jumaane Smith, makes an appearance at Shea’s Smith Theatre on Thursday, June 30th at 7 pm.  Smith, who is known for his role as the touring trumpet player for Michael Buble’, recently produced his own CD.  Joining him is Buffalo native on drums, Carmen Intorre.  Tickets $35.

The legendary Pat Martino and his trio make a return visit to Buffalo Iron Works on Friday, July 8th for two shows at 8 pm and 10 pm.  Tickets are $40 general admission and $55 reserved seating.

The Preservation Hall Jazz Band makes an appearance at the Thursday Canalside concerts on July 14th at 6:30 pm

The JazzBuffalo / Hollow Bistro First Saturday Jazz Brunch will be held on Saturday, July 16 beginning at 11:30 am to 1:30 pm and will feature Ralph Fava on guitar and Bud Fadale on bass.  Be sure to call for reservations soon for seating and excellent menu!