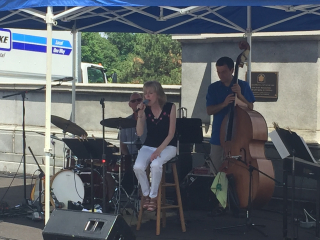 Cooler air was blowing in the wind after a few steamy hot days.  The day was picturesque with bright sun and rolling clouds.  Overlooking Hoyt Lake, it was a semblance of George Seurat’s “Sunday Afternoon On The Island Of La Grande Jatte” painting.  For musicians and audiences alike, it makes for a summer afternoon suited for outdoor jazz.

Cindy Miller, the jazz vocalist from Rochester, kicked off the Buffalo News Summer Jazz Series taking full advantage of the weather to release her enjoyable energy.  Miller opened her first set with the classic tune “Let’s Fall In Love” with a good amount of swing.  From the first chords of this song, you could not help but fall in love with her performance energy and stage presence.  Influenced by her years of performing cabaret style acts in Rochester and throughout the globe.

Miller was backed by a very lyrical and flowing performance by Michael T. Jones on keyboards, a rhythmic bass backing by Wayne Moose, and the solid Dan Hull on drums.  While there were some hiccups in getting underway with technical sound matters, once underway Miller and the band put on some swing.  Notably, it was refreshing to hear Michael T. Jones take expanded solos that gave welcomed added dimensions to many of the songs.

This was evident in the tunes “East of the Sun” and “I Got You Under My Skin” when the band was in hard swing mode.  Such tunes also gave Miller a chance to showcase not only her boundless energy but to put her artful vocalese and scatting abilities on display.  Often overlooked, but such abilities today are rarer to find and Miller keeps the art alive exceptionally.

The afternoon also gave us a couple of tunes incorporating the sounds of Brazil.  On Irvin Berlin’s “Always”, Miller used an up-tempo Bossa Nova arrangement of this classic ballad.  Tastefully done.  My favorite of the afternoon was a Samba-infused rendition and arrangement of Summertime.  By this time, the band fell into a groove.  This melodic toe-tapping version gave Miller ample room to showcase her art of vocalese and scatting.

In the end, Miller ended as she began.  Singing about love with the old classic “I Can’t Give You Anything But Love, Baby” written by Jimmy McHugh.  And, in the end, it was what Cindy Miller does best – create a love affair between her and the audience.