Contrary to the weather forecast for the day, a thick overcast of clouds filled the sky.  Providing cover from the intense heat of the sun.  Making for both the audience and musicians, a bearable and extraordinary afternoon and evening of jazz.

The first of two Sundays took place yesterday as part of the 21st Annual Pappy Martin Legacy and Masten Jazz Festival starting at 3 pm.  The festival is named after the long-time jazz musician who fostered the movement of jazz for decades here and beyond.  It began with the group, Nickel City Band, bringing an energetic set of R&B infused jazz to the stage.  In which, the audience thoroughly enjoyed as many can be seen singing along.

The festival Master of Ceremony and host was Eulis Cathey, the Buffalo native who now is the host daily on the Sirius Radio Real Jazz Channel.  Bringing his familiar voice to the stage brought a credible “Real Jazz” flavor to the proceedings.

The Love Supreme Ensemble, dedicated to teaching the youth jazz in the Masten District, brought a mix of youth and veterans Ron Peterson on the B3 Hammond organ and Buffalo native Rodney Appleby on bass.  Peterson was stellar on the B3 Hammond and Appleby closed with a George Benson-like vocal version of This Masquerade.

The afternoon began to really cook, like the pervasive smell of barbecues taking place at the festival, when the Jazz Example took the stage.  The band featured Bilal Abdul on sax, Chick Buffamonte on guitar, Jerry Livingston on bass, Doug “Trigger” Gaston on keyboards, and Ben Clyborn on drums.  The band kicked off with original tunes encased with Latin jazz grooves.  And, also featured an infectious jazz-soul original entitled Alicia, written by Gaston for his daughter. The Curtis Lundy Quartet brought together a stable of young musicians from the New York City area that Lundy typically surrounds himself with.  The bassist extraordinaire stuck to hard-driving bebop and hard bop tunes.  Showcasing his thundering bass lines.  Of particular note, was a spirited hard bop version of the classic Summertime.

The headliner for this first Sunday was the rising star, as Cathey exclaimed, “bursting onto the scene of jazz”, Etienne Charles.  The superb trumpeter, composer, educator, and arranger has introduced a fresh take on jazz with the infusion of Afro-Caribbean rhythms into jazz.  The band was recently showcased at Dizzy’s Coca Cola Club at the Jazz at Lincoln Center via a live broadcast. 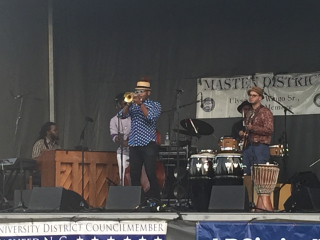 Charles mostly pulled from his most widely acclaimed CD, Creole Soul.  This was evident in the Thelonious Monk tune, Green Chimneys.  In Charles arrangement, the familiar chants of the horns are complemented by an airy background of Afro-Caribbean rhythms, which saw Etienne Charles switching from trumpet to percussion.

Here is the tune, Green Chimneys, from the Creole Soul album of work by Etienne Charles:

A modern jazz twist was showcased on the tune You Don’t Love Me (No, No, No).  Fronted at the start by Charles trumpet stylings, the rhythm had a subtle blending of jazz fusion with fabulous bass playing and rhythmic drumming.

Perhaps the audience favorite, and the tune that has garnered much attention on jazz playlists, including that of Cathey, was the interpretation of Bob Marley’s classic, Turn Your Lights Down Low.  The clarity of Etienne’s trumpet sliced through the humid air with mesmerizing beauty.  As the summer night light began to fade, this was a perfect ending to the evening.