A variety of jazz hits the Buffalo scene this weekend.  From organized jazz to jazz blended with the sounds and rhythms of soul, blues, and R&B.

In a week filled with the sounds of jazz organ, Buffalo welcomes back a native and the B3 Hammond Organ legend, Dr. Lonnie Smith.  Dr. Smith has risen to the pinnacle of recognition in B3 Hammond jazz lore for his unique interpretations of jazz soul.  Truly one of the greats in jazz today.  This is the first of two Sundays at the MLK Park for the reunion, which will feature singer Melba Joyce this week also as well as the Dale Toliver Band next Sunday, August 14th.  Here is a nice video showing close up the energetic style of Dr. Lonnie Smith: 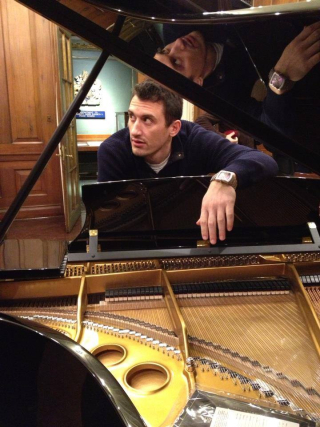 Mark Marinaccio, formerly leader of BeArthur, which performed throughout the area a few years ago, makes a return to the music scene with a collection of new original compositions.  Marinaccio blends a variety of different music styles together to include jazz, blues, soul, and R&B.  Joining Mark for this occasion will be Preston Brown (drums), Paul Yates (bass), Tim Clarke and Jim Bohm (trumpets), Brendan Lanighan (trombone), Tom Marinaro (alto sax), Ken Witman (tenor sax) and Tim Martin (baritone sax). 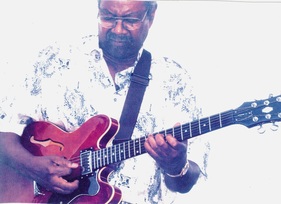 The prolific guitarist Greg Millar brings his quartet back to Pausa to feature the soulful organ-based jazz he learned while touring with the great Charles Earland.  See Ron Peterson on the B-3 Hammond Organ, Ray Scott on saxophone, and Abdul-Rahman Qadir on drums. 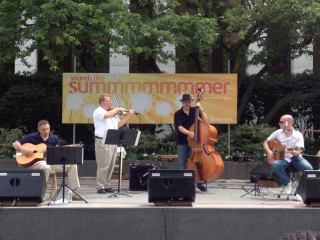 This will be the last of the Queen City Social events taking place downtown at the Fountain Plaza.  It will feature the dynamic gypsy jazz-oriented band with former members of Babik.  Joining in the fun will be Dr. Jazz. 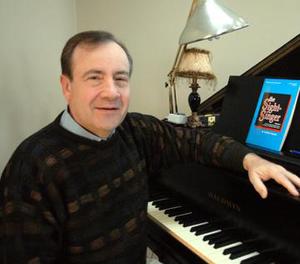 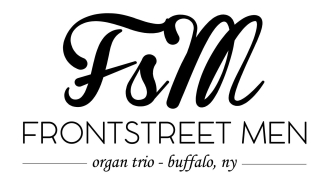 On Friday, August 5th see the band The Frontstreet Men at Pausa Art House at 8 pm for another treat of organized jazz.  The band features Dave Pinchoff on organ and keys, Ian Adelstein on guitar, Stephen Lattimore on drums, and special guest on saxophone Max Swan.  More organized jazz, soul, and blues. 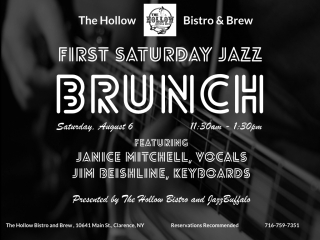 On Saturday, August 6th at 11:30 pm, the Hollow Bistro / JazzBuffalo Saturday Jazz Brunch takes place.  The brunch will feature the stellar duo of Janice Mitchell on vocals and Jim Beishline on keyboards.  Make sure to get your reservation in!

On Saturday, July 23rd at Hot Mama’s Canteen beginning at 1 pm you can see Jazzline for Beats and Brunch followed by Ann Philippone at 5 pm.

On Saturday, August 6th,  My Cousin Tone’ heads across the border to play at the Crystal Chandelier in Crystal Beach, Canada beginning at 7:30 pm. On Sunday, August 7th, at 6 pm at the Colored Musicians Club, see the homecoming of the Troy Brothers with John Troy on tenor sax and Mike Troy on alto sax.  Joining in – and for more B3 Hammond fun on this "organized" weekend – will be Harry Graser on the B3 Hammond and Alec Dube on drums.  (Saw Mike Troy last week at Smalls in NYC – up and coming super alto sax player!) 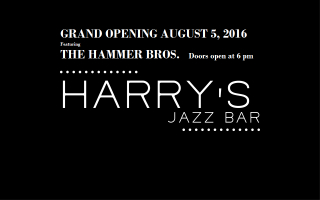 Across the border in Niagara Falls, Canada (on Victoria and Bridge), a new jazz club will be opening this Friday called Harry's Jazz Bar.  Their intent is to feature well known and Juno award-winning jazz artists.  The club opens with the Hammer Bros. Friday, August 5th with doors open at 6 pm and will feature pianist Andrean Faruggia joined by vocalist Sophie Pearlman and bassist Rob McBride on Sunday, August 7th at 5 pm. 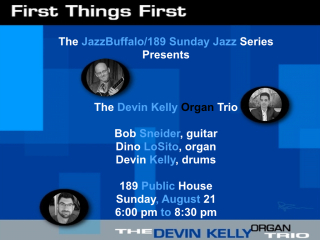 On Sunday, August 21st at 6 pm, do not miss the JazzBuffalo / 189 Public House Sunday Jazz Series, which will feature The Devin Kelly Organ Trio.  The highly regarded jazz guitarist from Eastman, Bob Sneider, will be joined by Dino Losito on organ, and Devin Kelly on drums.  The band is working on a new CD.  Here is a rendition of The Touch Of Yur Lips from their first CD First Things First, where all three shine: