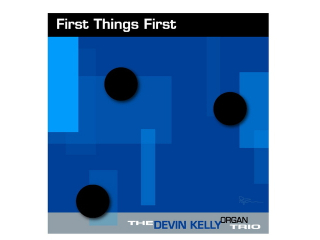 The Devin Kelly Organ Trio also will feature organist Dino Losito.  Losito has performed with the likes of Houston Person, Eric Alexander, Joe Romano, Dave Liebman, Wallace Roney, Harry Allen, and Nancy Kelly.  An impressive line-up for an organist in high demand at clubs and festivals.  Dino has performed at many notable venues throughout the country and abroad.  Which include performances at Blue Note, Birdland, NBC Rainbow Room, and Dizzy’s at Jazz at Lincoln Center (NYC).

Devin Kelly's first major recording release, First Things First, received high praise.  Reaching the top ten playlists of jazz radio stations in Los Angeles and Miami, as well as, in other major cities.  Evident is the unmistakable sound of the Hammond organ that also has a unique feel and sound.  Check out this great tune, These Are Soulful Days,  from the CD:

The trio is in the studio, this week, recording their second CD to be released sometime in the near future.  They may introduce new tunes from the tracks being recorded this week!