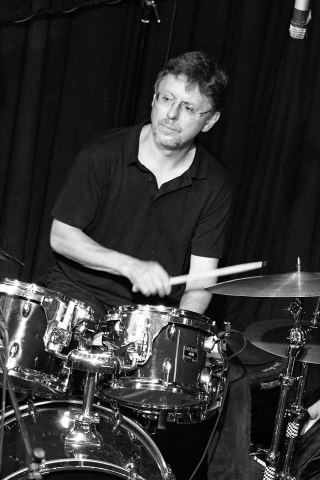 John Bacon, Jr., the 2015 JazzBuffalo Jazz Artist of the Year, brought together a collection of young jazz talents to Pausa Art House last night.  Performing original compositions and arrangements that displayed far more than his superb drumming.  What we all were able to see is John Bacon, Jr. in the context of a leader and impressing his footprints on the JazzBuffalo scene.

John is a prolific drummer and composer.  Spanning over 25 years of being a rock of jazz locally.  He holds a Masters Degree in Music Performance and has a PhD in Music Composition.  And, did it show last night!

Bacon, Jr. is known for composing jazz suites and he put those on display last night with young and rising jazz artists between Buffalo and Rochester.  Featured were Brian Tervo on sax, Jared Tinkham on guitar, Danny Ziemann on bass, Alec Dube on vibes, and Alex McArthur on vocals.  An impressive line-up where John serves as the leader and obvious mentor.  Each of the performers had special moments throughout the evening.  From Tervo’s tenor and soprano sax playing to Tinkham’s stimulating guitar solos, the band rose to a bar Bacon, Jr. most surely set.

Here is a clip of interplay between Tinkham, who garnered most votes in the JazzBuffalo Poll for 2015 JazzBuffalo Jazz Guitar and Bacon, Jr.:

Here is another clip, that showcases the impressive playing of Brian Tervo, to give you a taste:

John Bacon, Jr. and The Jazz Current is an exciting development that does what the name implies.  Keep jazz current and relevant.  For those cataloging best performances, jazz artists, and jazz groups for the annual JazzBuffalo Poll, those who saw this performance last night will most surely be putting this on their nominating lists!

See John Bacon, Jr. and the Jazz Current at the upcoming JazzBuffalo and Road Less Traveled Productions Jazz Series on Wednesday, December 14th from 7-9 pm as they close out the fall portion of the series.