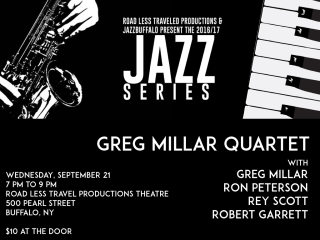 JazzBuffalo, in association with Road Less Traveled Productions, presents a quartet of legendary jazz artists who have made an impressive mark on the history of jazz in Buffalo.  The jazz series, which kicked off on Wednesday, September 14th with Phil DiRe and Friends, resumes on Wednesday, September 21st with the Greg Millar Quartet.

Greg Millar is one of Buffalo’s premier guitar performers who has a rich history in Buffalo jazz history, as well as, in performing with jazz greats.  Most notably, performing as the guitarist for the Charles Earland groups in the 1970’s.   Earland is one of the heroes of the Hammond B3 organ sound made famous by the likes of Jimmy Smith, Jack McDuff, and Dr. Lonnie Smith.

Here is Millar on an Earland tune that was a big hit, Will You Still Love Me Tomorrow:

The quartet also includes master B3 Hammond organ player, Ron Peterson.  One of the most prolific organ jazz artists in Buffalo and the region for the past few decades.  Also, the quartet will feature Rey Scott on sax.  Scott is one of the members of the historic Sun Ra Arkestra jazz ensemble (from Chicago) that broke ground on new sounds in free jazz for a large ensemble.  A pioneer in baritone sax performing in such settings.  The band rounds out with Robert Garrett on drums.  Garrett has performed with Van Taylor Jazz for the past two decades, which includes trip overseas performing for USO concerts to entertain the troops.

The new setting of the converted historic 1914 lobby of the theatre proved to be a spectacular experience for those who attended.  Come and experience the best in jazz in this setting.  This Wednesday, September 21st at 7 pm at the Road Less Traveled Theatre on 500 Pearl Street near Tupper.  And, look for more great jazz coming your way at the JazzBuffalo and Road Less Traveled Productions Jazz Series!