This coming week finds a multitude of big events and notable visits from jazz performers outside of Buffalo.  Tremendous jazz continues throughout Greater Buffalo with something for everyone. 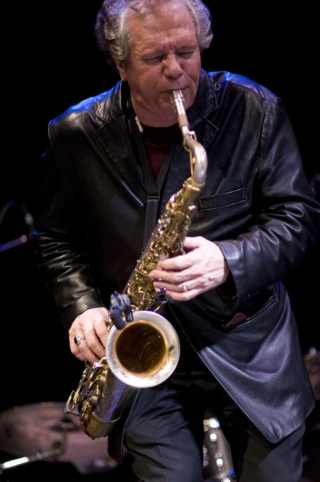 The legendary tenor sax player who hails from Cleveland makes a return visit to Buffalo after a span of many years.  Krivda toured in his career with Quincy Jones and has made a mark in Cleveland with a variety of band formats from big bands to quintets, as well as, hit the jazz festival circuit.  Cutting a number of albums and earning the Jazz Legends award from Cleveland's Tri-C Jazz Festival and a CPAC (Community Partnership of Arts and Culture) Fellowship.  His new CD, Requiem For A Jazz Lady, has received much acclaim.  To see one of the tenor sax legends whose career spans 50 plus year, make it to Pausa Art House.  Here is the title track from his latest CD where you can hear his distinctive style:

The Rippingtons Featuring Russ Freeman, Friday, October 21st at 8 pm at UB Center for the Arts

The Rippingtons have been one of the pioneering groups in the world of Smooth and Contemporary Jazz.  Together for 30 years, the group will feature founder and original guitarists Russ Freeman in a reunion with Brandon Fields, the original saxophonist for the group.  Releasing 22 albums and receiving Grammy nominations along the way.  They will be performing from their True Stories album, which hit #1 on the Billboard Jazz Charts.  For smooth and contemporary jazz fans of the funky backbeat and the melodic horns and guitar interludes, then this is for you.  Here’s a clip of what’s to come:

“Since coming to New York in 1981, Niagara Falls native Pete Malinverni has made a mark, earning an entry in the 'Biographical Encyclopedia of Jazz'; by Leonard Feather and Ira Gitler. He has shared stages and studios with a wide range of great musicians, on festivals and in concert settings in the US and abroad – his appearances on NPR's Piano Jazz with Marian McPartland, including one with Elvis Costello, have been hailed as engaging and inspiring. His is an art that gives proof to the statement that passionate music is indeed the universal language.”  An exquisite pianist, Malinverni will be joined by Ben Allison, bass; Akira Tana, drums, plus vocalist Alexis Cole and others from the SUNY Purchase Jazz Studies program.  Here is a clip from his release in 2010 of the beautiful tune – La Vie En Rose: 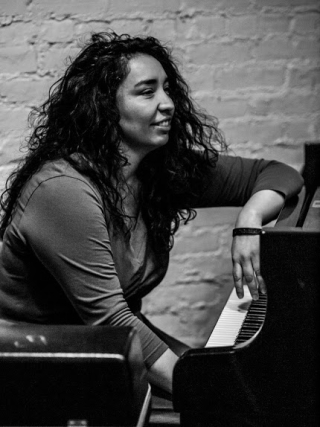 Steve Baczkowski continues to bring in world-class jazz artists, specializing in the genre of free and improvisational jazz, to Hallwalls Contemporary Arts Center.  Angelica Sanchez has been widely acclaimed for her compositions.  In a paradox twist, she is hailed for bringing a unique structure to free jazz that works and embodies her classical-leaning stylistic piano playing.  Her music has been recognized in international publications like Jazz Times Magazine, The New York Times, The Chicago Tribune, and more.  Sanchez will be joined by noted composer and jazz guitarist Omar Tamez, who has performed globally in 144 countries.  Here is a sample of Angelica Sanchez from her latest CD: 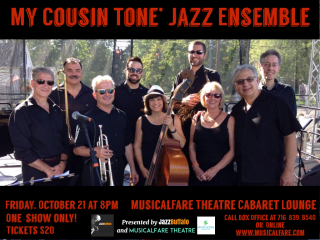 JazzBuffalo and MusicalFare Theatre presents the 9-piece ensemble that opened for the Lewiston Jazz Festival on the Main Stage this year.  The group takes their newly configured ensemble and arrangements to the Premier Cabaret Lounge at MusicalFare Theatre.  The band will feature special guest Dr. Rick Fleming (Director of the Buffalo State Jazz Ensemble) on trombone along with vocalist Mary McMahon.  With Karen Ragusa, Jim Matteliano, Andy Peruzzini, Tom Marinaro, Bill Basil, Tim Martin, and Tony Zambito.  As of this writing, only 5 seats left!

New York Voices is known for their close-knit, jazzy vocal harmonies, in a similar style to Manhattan Transfer.   Embracing the sounds of vocal instrumentation and jazz vocalese. New York Voices will be presenting a show called “Sweet Sounds of the 70s” with the BPO orchestra conducted by Principal Pops Conductor John Morris Russell.  Here is a clip of them in action performing a classic Earth, Wind, and Fire hit:

On Sunday, October 23rd at 3 pm at the Carnegie Arts Center see the group Gruvology, which features original compositions by Walter Kemp, III and Bernard Kunz 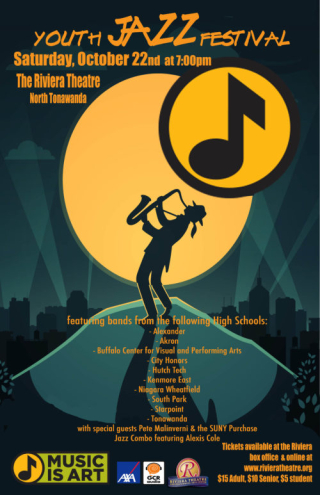 On Saturday, October 22 at the Riviera Theatre in North Tonawanda, Music Is Art is hosting a Youth Jazz Festival.  The event will feature various high school jazz ensembles.  Including bands from the following high schools:

The event will include a guest appearance by pianist Pete Malinverni and the SUNY Purchase Jazz Combo with special guest Alexis Cole.  Proceeds from this event support Music is Art’s educational programming.  Admission is $15 / $10 Seniors / $5 Students.

Suzanne Fatta studied Vocal Performance and Music History at Oberlin Conservatory of Music, the Eastman School of Music and the University of York (UK). In addition, she has a Masters in Medieval Studies from Harvard University, where she won a university-wide teaching award of distinction for a music department course on Jazz.  On Thursday, October 27th at the Historic Colored Musicians Club at 6:30 pm, Fatta will be having a CD release party for her Demo CD – Brucia La Terra!  Her sound is a fusion of world, jazz, classical, indie folk, and reggaeton music styles.  Joining her on this evening will be Mark Marinaccio – piano, Carl 'Flute' Johnson – drums, Joey Gonzalez – percussion, keyboard, RiShon Odel – bass, and Sara Rogers – trumpet. 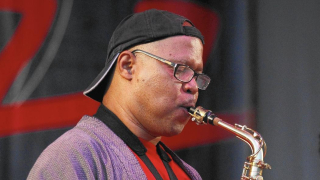 October also usually means the start of the Art Of Jazz Series at the AKG Art Gallery produced by Jon Nelson.  This year it will kick-off on Saturday, October 29th at 7:30 pm with saxophonist Steve Coleman and Five Elements. 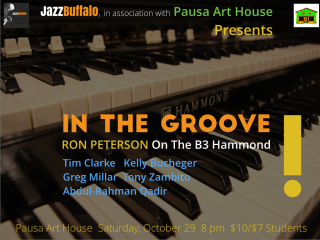 JazzBuffalo, in association with Pausa Art House, will present the concept performance, In The Groove!, on Saturday, October 29th.  The evening will be devoted to the groove sound of the B3 Hammond organ jazz and will feature B3 master Ron Peterson with Greg Millar, Tim Clarke, Kelly Bucheger, Abdul-Rahman Qadir, and Tony Zambito 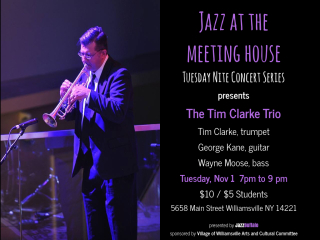 JazzBuffalo will be kicking off a new jazz series to take place on Tuesday nights in the historic Meeting House building in the Village of Williamsville.  We are excited to announce the first event will be held on Tuesday, November 1st and feature the Tim Clarke Trio with Tim Clarke, trumpet, George Kane, guitar, and Wayne Moose, bass.

The JazzBuffalo and Road Less Traveled Productions Jazz Series resumes on Wednesday, November 2nd at 7 pm with the exciting 8-pience ensemble, Mark Marinaccio and Friends.  Original music at its best with a fusion of pop, soul, and R&B fused with jazz. 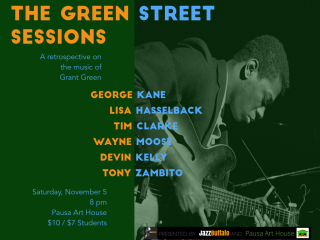 The next JazzBuffalo and Hollow Bistro First Saturday Jazz Brunch will take place on Saturday, November 5th and will feature Jazzline with Dennis Warne, guitar, and Jennie Jones, sax/vocals.  Call for reservations soon! 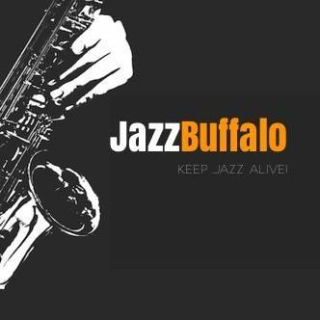 If you are currently not subscribed to the Jazz In Town email distribution, please sign up here and get it delivered to your email box.

JazzBuffalo has partnered with several venues and organizations to create fantastic ongoing jazz series.  Be sure to visit the JazzBuffalo Jazz Series page here to see the series underway.

For musicians and venues, please begin to submit your events through the event listing page on jazzbuffalo.org.

Sponsors are currently being sought for the annual JazzBuffalo Poll.  If you are a venue or organization supporting music and jazz, please sponsor the 2016 JazzBuffalo Poll!

JazzBuffalo is now accepting donations to help grow the organization and the services provided to the Greater Buffalo Community.  Visit here to learn more and please donate and help grow JazzBuffalo!