An interesting and eclectic variety of jazz is taking place this weekend and beyond in Greater Buffalo.  And, an international flavor of jazz hits the area.   The week also carries a bit of sadness as we remember one of the revered jazz artists in our area, Greg Piontek, who left us too early.

On Thursday, November 17th, Smooth and Soul Jazz fans can see former Tower of Power saxophonist Richard Elliott at the Buffalo State Performing Arts Center.  Elliott’s star has risen and shines brightly in the Smooth and Soul Jazz genre characterized by the familiar smooth jazz beat and the piercing smooth sounds of Elliot’s saxophone.  Here is a sample for you and good seats are still available:

Prieto is a prolific international drummer and percussionist with an emphasis on Afro-Cuban drumming.  Since moving to New York in the late 1990’s, he has received international acclaim as a percussionist, author, and educator.  His music characterized by Afro-Cuban jazz influence and that of the free jazz movement.  Prieto is the winner of the 2011 MacArthur , which stated that his "dazzling technical abilities electrify audiences".  The following gives you a sense of what to expect:

For a unique experience in chamber-jazz (mix of classical and jazz check out the quartet resAUnance.  The quartet features Esin Gunduz (voice), Jonathan Golove (cello), Michael McNeill (piano), and John Bacon (vibraphone & percussion).   The group will perform music from their critically-acclaimed album debut "Migration" as well as new music.  Here is a taste of what’s to come:

triPAYAZZO, Tuesday, November 22nd at 7 pm at The Meeting House in Williamsville 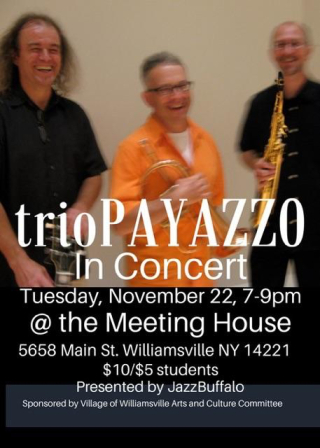 This dynamic trio features a unique instrumentation of saxophone, guitar, and drummer by three of our most gifted performers in the area in Harry Fackleman on sax, Bernard Kunz on guitar, and Andy Peruzzini on trumpet.  Enjoy the intimacy of the Meeting House on Main Street in Williamsville as the trio performs an eclectic set of songs from mainstream to bossa nova.

W.C. Maggio / The Other Side Featuring The Music Of Juini Booth, at Eleven Twenty Project at 6 pm 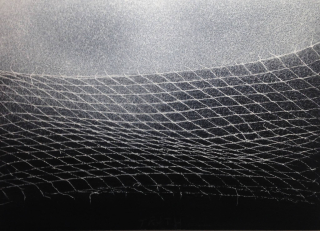 Art meets jazz in this event.  Eleven Twenty Projects will be presenting the art exhibition entitled The Other Side, an exhibition of recent paintings by Buffalo-based artist William C. Maggio. Spanning several series, this exhibition will feature approximately 35 paintings on canvas. During the event, the music will be provided by the native of Buffalo and legendary jazz bassist Juini Booth and his trio.  Booth has a career that spans over 40 years and has performed with the likes of McCoy Tyner, Art Blakely and the Jazz Messengers, Randy Weston, Betty Carter, and more.

Jazz In The Sanctuary:  100 Years For The Historic Colored Musicians Club Local 533 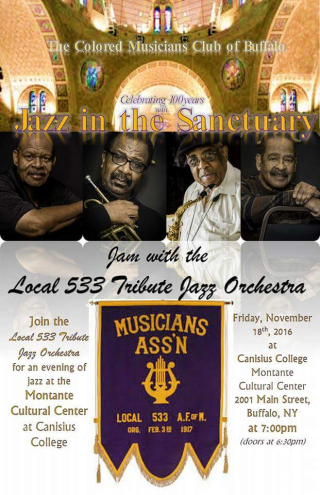 On Friday, November 18th at the Montante Cultural Center located at Canisius College, there will be a jazz tribute and jam celebrating 100 years of the Local 533.  The musicians union that started it all in 1916.  Hear George Scott lead a group of musicians in this historic celebration.   A tremendous testament to the legacy of the Historic Colored Musicians Club that is an integral fabric of the city of Buffalo, as well as, the jazz community.

On Thursday, November 17th catch the trio of Ben Levitt on bass, Alec Dube on drums, and Jared Tinkham on guitar at Matinee on Main Street Downtown Buffalo.

On Sunday, November 20th at 3 pm see the UB Jazz Ensemble give their final concert of the semester at Slee Concert Hall

On Sunday, November 20th at 3 pm you can catch Blue Stone Groove at the Carnegie Art Center in North Tonawanda

Don’t forget the Historic Colored Musicians Club has open rehearsals on Mondays with George Scott Big Band and on Thursdays with the Carol McLaughlin Big Band.  Sundays typically have a performance at 6 pm followed by jazz jam at 7 pm. (This week features a trio with Michael McNeil on piano, Juini Booth on bass, and John Bacon, Jr. on drums)

Not Exactly Jazz But…

On Friday, November 18th at Pausa Art House at 8pm the Alex McArthur Sextet will do a tribute to the funk band Vulfpeck

On Saturday, November 19th at Pausa Art House at 8 pm see Kike, Miguel, and Vladimir for an evening of folkloric music from Central and South America that embodies the spirit of Argentina, Ecuador, Cuba, and other countries of this part of the world. 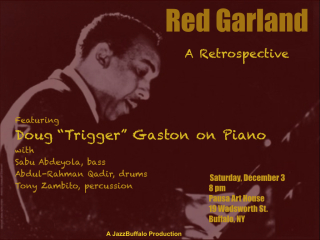 On Saturday, December 3rd at 8 pm at Pausa Art House, catch the second of the Red Garland retrospective presented by JazzBuffalo and featuring Doug “Trigger” Gaston 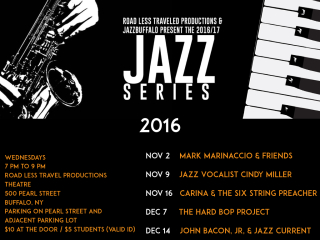 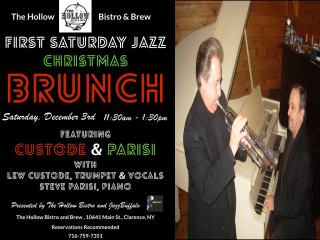 The next JazzBuffalo and Hollow Bistro First Saturday Jazz Brunch takes place on December 3rd and will feature Custode & Parisi in a Christmas Jazz Brunch performance beginning at 11:30 am.  Call for reservations soon! 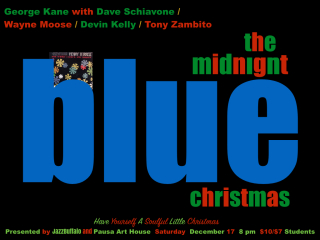 On Saturday, December 17th at Pausa Art House at 8 pm make plans for a special holiday concert entitled Midnight Blue Christmas: Have Yourself A Soulful Little Christmas.  The Midnight Blue Experience (Kenny Burrell retrospective group) will perform Christmas songs in the spirit of the classic 1966 Kenny Burrell Christmas album, which was a first of its kind at that time. 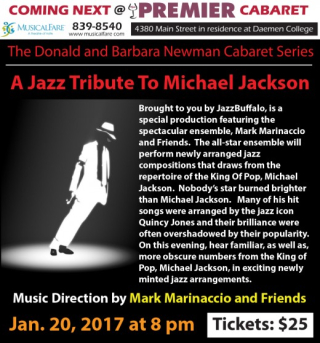