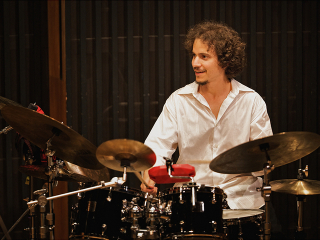 Usually, when the drummer is the main bill for a jazz concert, there is a tendency to think the concert will be primarily a showcase for the drummer’s skillful talents.  A concert interlaced with tunes to allow the drummer extended solos and give the audience a jaw-dropping thrill.

Some of that happened last night. But, so much more as well.

The Dafnis Prieto Sextet came into town last night for the Albright-Knox Gallery Art Of Jazz Series.  While Dafnis Prieto was the main focus, he does the rarity in this format.  Putting the ensemble of horns and rhythm section out front of the event.  The event that really happened was the impressive and inventive Prieto compositions put on display.  Adeptly performed by sidemen who are stars in their own right.

The sextet featured Brian Lynch on trumpet, Peter Apfelbaum on tenor sax, Manuel Valera on piano, Felipe Lamoglia on alto sax, and Johannes Weidenmueller on bass.  Each had ample moments of shining on individual solos, as well as, providing melodic structure to Prieto’s compositions.

Musical compositions came from Prieto’s latest project and CD Triangles and Circles.  Evident throughout the songs was the Afro-Cuban heritage of the Cuban-born musician.  While, not in the prominent method of Latin jazz, the kernel for each tune had the faint rhythm of the clave embedded in each song.

Standouts included Blah, Blah, Blah followed by Blah, Blah.  Two songs loosely based on the clave rhythm and melodic arrangement.  The ensemble seamlessly transitioned from one song to the next with the room needed to offer up inspiring solos.  Two For One further demonstrated Prieto’s unique composing abilities with what literally felt like two songs in one.  Two melodic efforts circling in orbit amongst each other.  The sextet ended with a tune entitled Opening.  A wry sense of humor on display by Prieto as he explained closing with a tune called Opening.  It was the perfect ending, rich with the Afro-Cuban influence and putting jazz artistry on the forefront.  Here is the tune Blah, Blah for a sense of what was performed:

Throughout, Dafnis Prieto displayed his command of the drums and his percussive skills.  Precise use of speed in his soloing that amazed.  At one point, soloing on the rims of the drums only without a flaw exposed.  This, we already knew he would showcase.  The surprise gift for the audience was the balanced and supreme compositions that puts Prieto on a much higher scale than perhaps the audience may have originally perceived.  That of a master jazz artist.